I told myself I wasn’t going to do this…

I’m only in Canada temporarily, so I didn’t want to make any recipes that were specific to this region, but my good friend insisted that I make these infamous Nanaimo Bars and share them on my blog. She handed me her grandmother’s recipe, and well… I couldn’t resist.

I had heard of these Nanaimo Bars, but didn’t really know what they were and certainly had never tasted them before.

So what are they??

They are  a triple layer, NO BAKE, {insanely rich} dessert that is named after a city (Nanaimo) in British Columbia, Canada.

I personally find these Nanaimo Bars to be a tad labor intensive, but totally worth it.

You’ll find yourself using the double boiler method twice. Once while making the “crust layer” and again when making the chocolate ganache that tops this decadent treat.

It’s important to use the double boiler method for the crust because you’re adding an egg, and you’ll need to cook it over the indirect heat in order to make sure you’re not consuming any raw eggs. 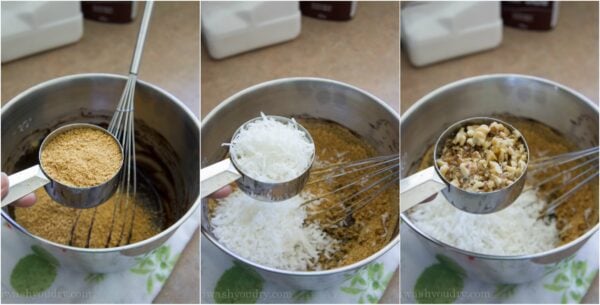 Once the chocolate mixture has thickened over the double boiler, you’ll add the graham cracker crumbs, coconut and chopped walnuts.

Try these variations to the crust:

Instead of graham cracker crumbs try Nilla wafer crumbs.
Toasted coconut instead of raw coconut.
Substitute any chopped nut for the walnuts. 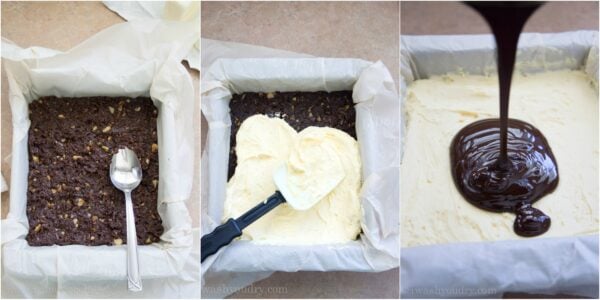 Press the chocolate mixture into a lined 8″x8″ pan and place in the fridge to chill while you make the middle vanilla custard layer.

This middle layer is like a vanilla custard and buttercream icing combination. The recipe calls for a “custard powder” which I had never heard of before, but sure enough, found it in the baking isle of my Canadian grocery store. It might not be available in the US, but I have read that using a vanilla pudding mix in place will yield similar results.

{You could also order yourself some vanilla custard powder on Amazon here.}

Once the top chocolate ganache layer has been added, you will chill it again in your fridge until it’s set.

Overall, it’s not a difficult recipe to make, but it does take some time.

It’s a deeply rich dessert, that I would recommend cutting into much smaller squares then I did… I could barely make it through one bar. But I pushed myself to the edge.

So if you’ve never had yourself a Nanaimo Bar, you should definitely try it at least once.

Give yourself a little Canadian culture. 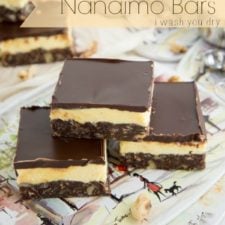 For the Middle Layer:

For the top layer:

Shawn is the Owner and Creator of I Wash You Dry. She loves to create and share simple, family-friendly recipes. Mom to 5 adorable children and dwells in the desert of Southern Utah.
PrevNext