There’s nothing quite as welcoming as the smell of fresh cinnamon rolls in the oven. This Super Easy Cinnamon Rolls Recipe will become your new favorite way to wake up on those special mornings! 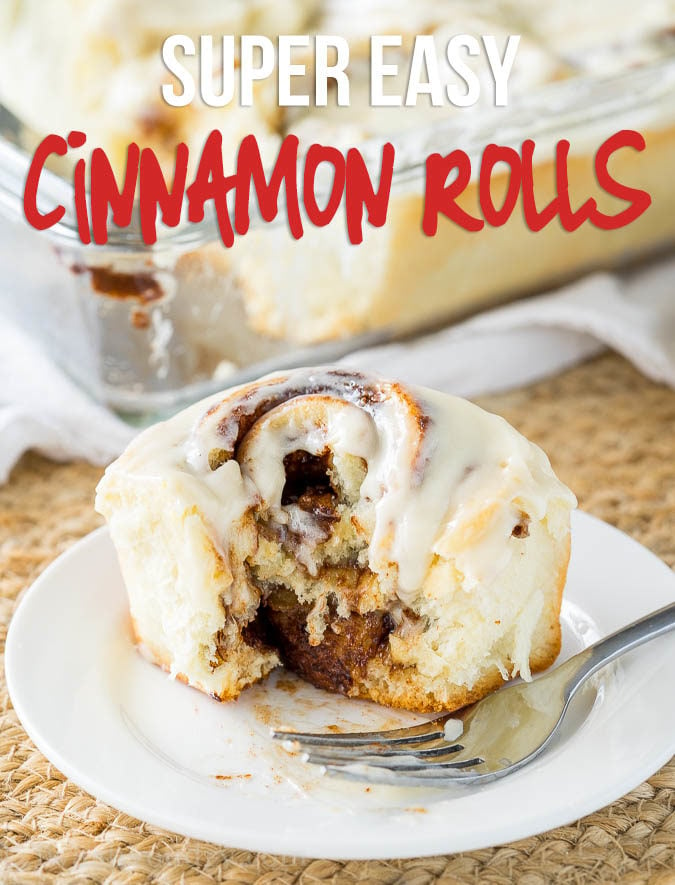 I’ve always been a fan of cinnamon rolls, but I’ve never really liked the long process that it usually takes to make them. After all, Pillsbury has tubes of cinnamon rolls that you can easily pop into the oven and be enjoying in no time.

So why take the time to make them from scratch? Well, I’ve recently fallen in love with the process. 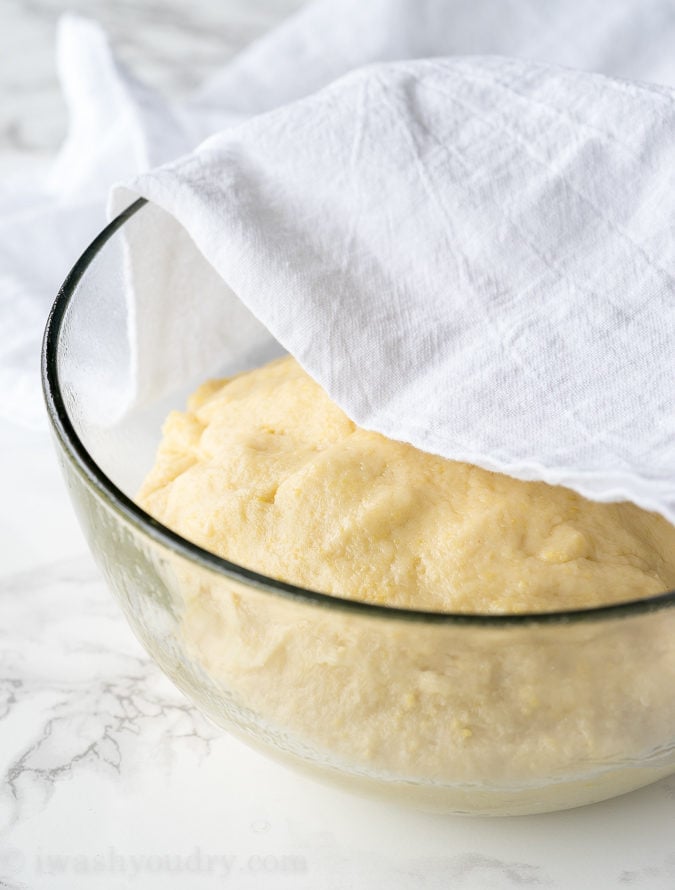 I had a friend come spend a few days with me recently and she made a batch of these Orange Cinnamon Rolls for me and my family.

There’s nothing like baking to bring a family together on a Saturday morning. 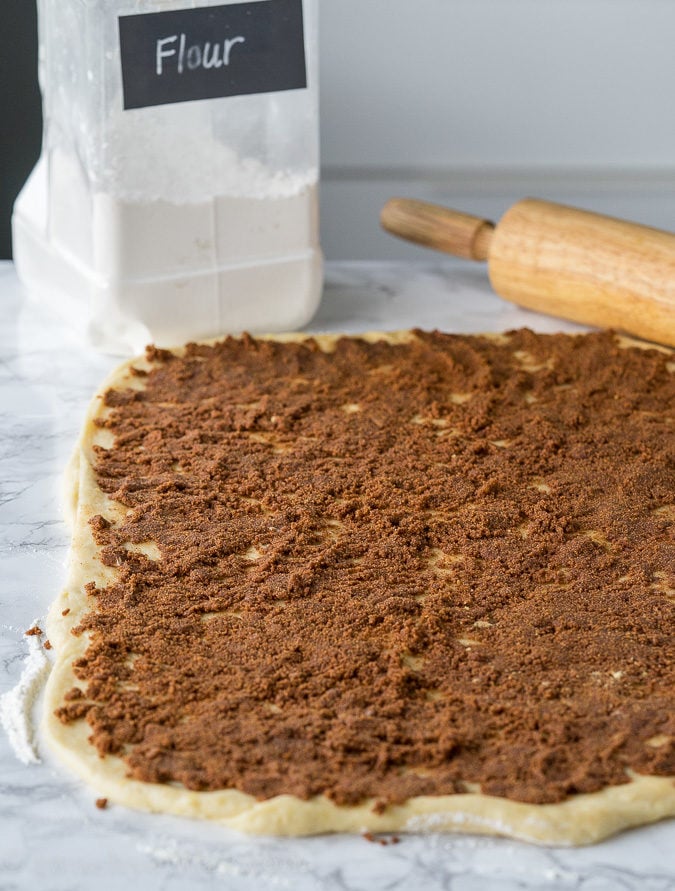 Since then I’ve taken the time to pin my hair back, tie on my apron and get a little messy in the kitchen with my kids.

I’ve even streamlined the process of making these cinnamon rolls, so it’s not as big of a headache as you would have thought!

They’re actually quite easy to make, so easy in fact, you’ll be wanting to make them every weekend! 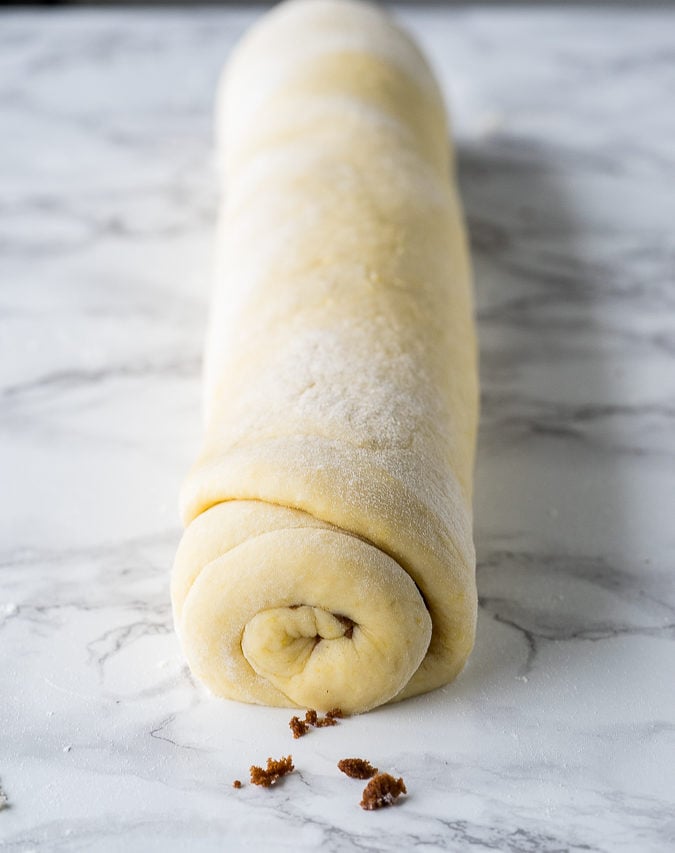 The ingredients for the dough are simple. Milk, yeast, sugar, butter, flour, eggs and salt.

You probably already have these ingredients in your pantry!

The trickiest part with homemade cinnamon rolls is the yeast. You’ll want to make sure your yeast is active and alive so that your rolls are soft and fluffy and not hard and crusty.

To do this, simply heat up your milk to about 110 degrees F and stir in about a tablespoon of sugar. Then sprinkle in your yeast and let it get foamy. If it’s not foamy within 5 to 10 minutes, you’ll want to start over with some new yeast. 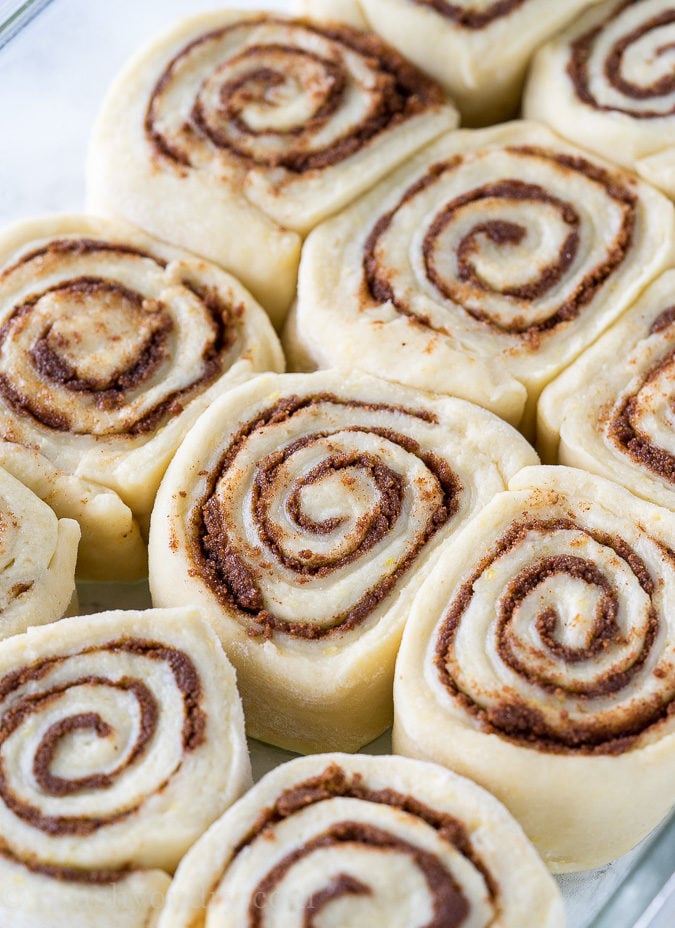 Combine the rest of your dough ingredients in a bowl and mix until combined, then add the milk/yeast mixture and use the dough hook to knead the dough.

You’ll want to let your dough sit and rise for 1 hour in a warm spot. This will let your cinnamon rolls become even more soft and fluffy! 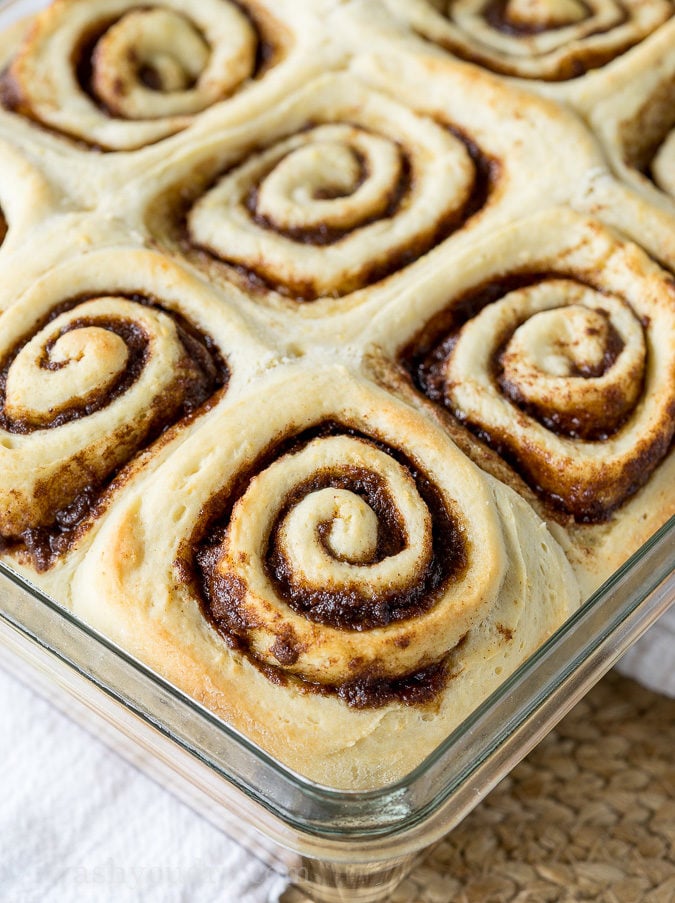 Once your dough has risen, place it on a floured surface and roll it out to a giant rectangle.

My kids love helping with this part!

Sprinkle the cinnamon roll filling all over the dough, making sure to reach all the edges. The cinnamon mixture is simply butter, brown sugar, cinnamon and a touch of nutmeg.

That nutmeg really makes that filling something special! Don’t skip it! 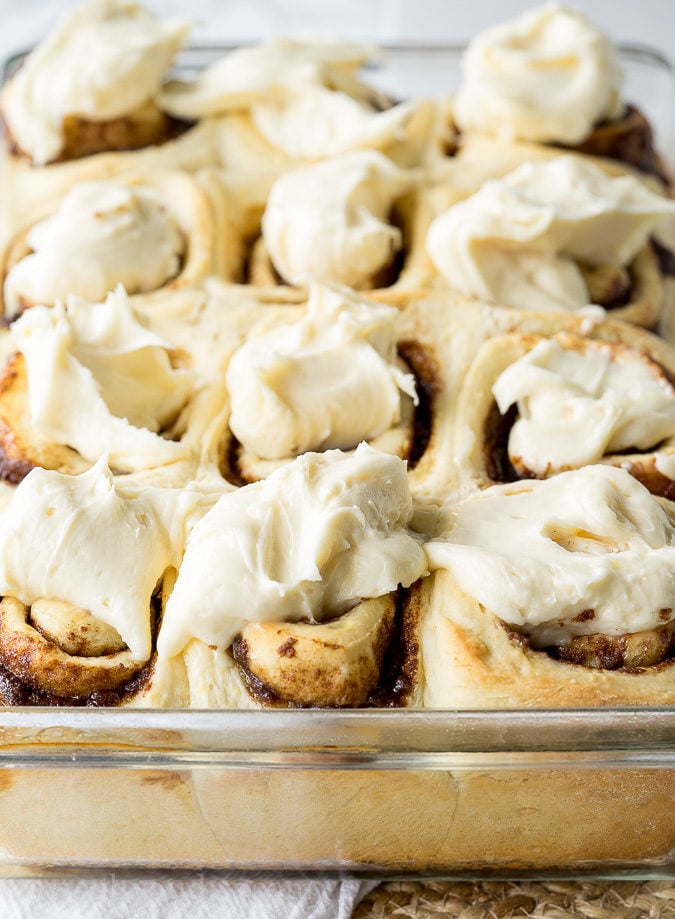 We love to make our cinnamon rolls in a smaller 8×12″ casserole pan, but if you’re wanting your cinnamon rolls to have a little more space try a 9×13″ pan or even a baking sheet to make them all separate rolls. 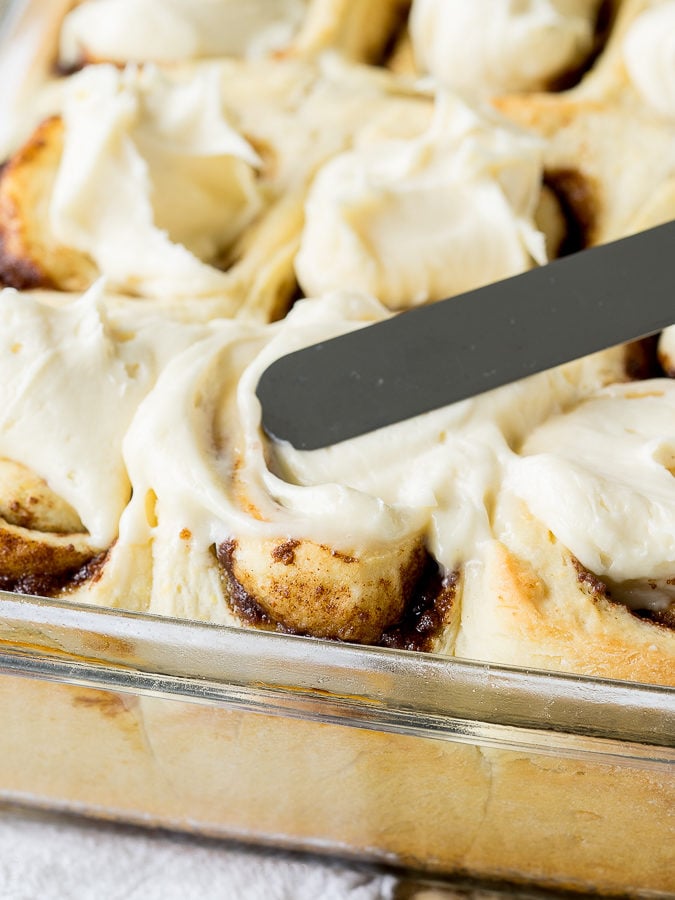 The frosting that goes on top of the cinnamon rolls is a simple cream cheese icing made with butter, cream cheese, powdered sugar and a touch of vanilla.

You guys, all of these ingredients, every single one, is a pure, simple, and honest ingredient.

I just love it.

I realize that baking cinnamon rolls is not an every day (weekday) type of breakfast, but for a special occasion, holiday or weekend, this Super Easy Cinnamon Rolls Recipe is sure to become a favorite. 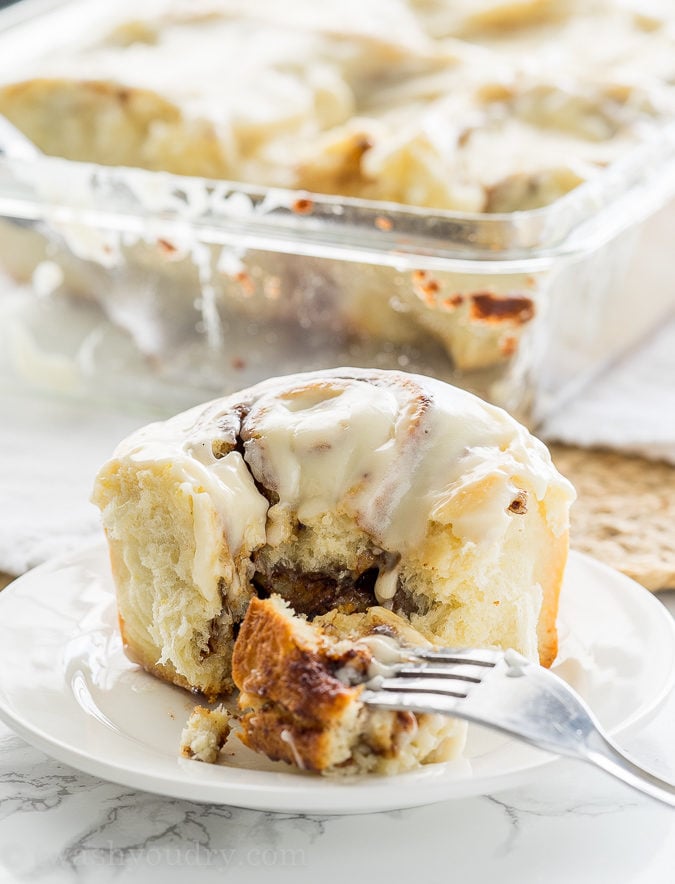 You’re going to love all those gooey layers and sweet icing, I just know it! 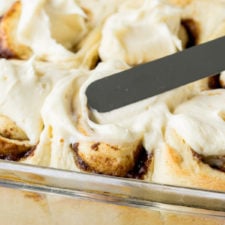 Use rapid rise yeast in place of the active dry yeast to cut the rise times in half!

How To Get A Me Moment Anywhere
Next Post:Greek Pasta Salad Recipe