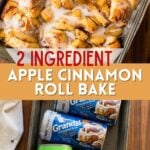 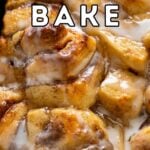 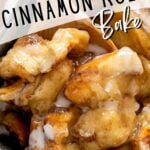 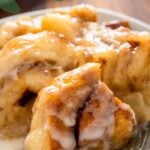 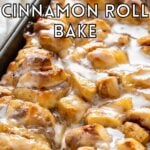 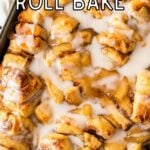 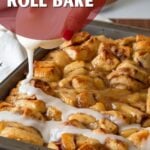 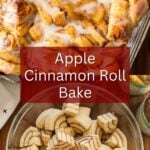 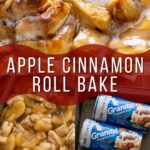 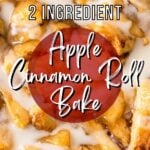 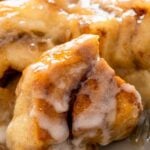 This quick and easy 2 Ingredient Apple Cinnamon Roll Bake is perfect for a warm and delicious breakfast or dessert!

I whipped up this cobbler-style dessert while camping one night and everyone raved about it. It’s now a family favorite. 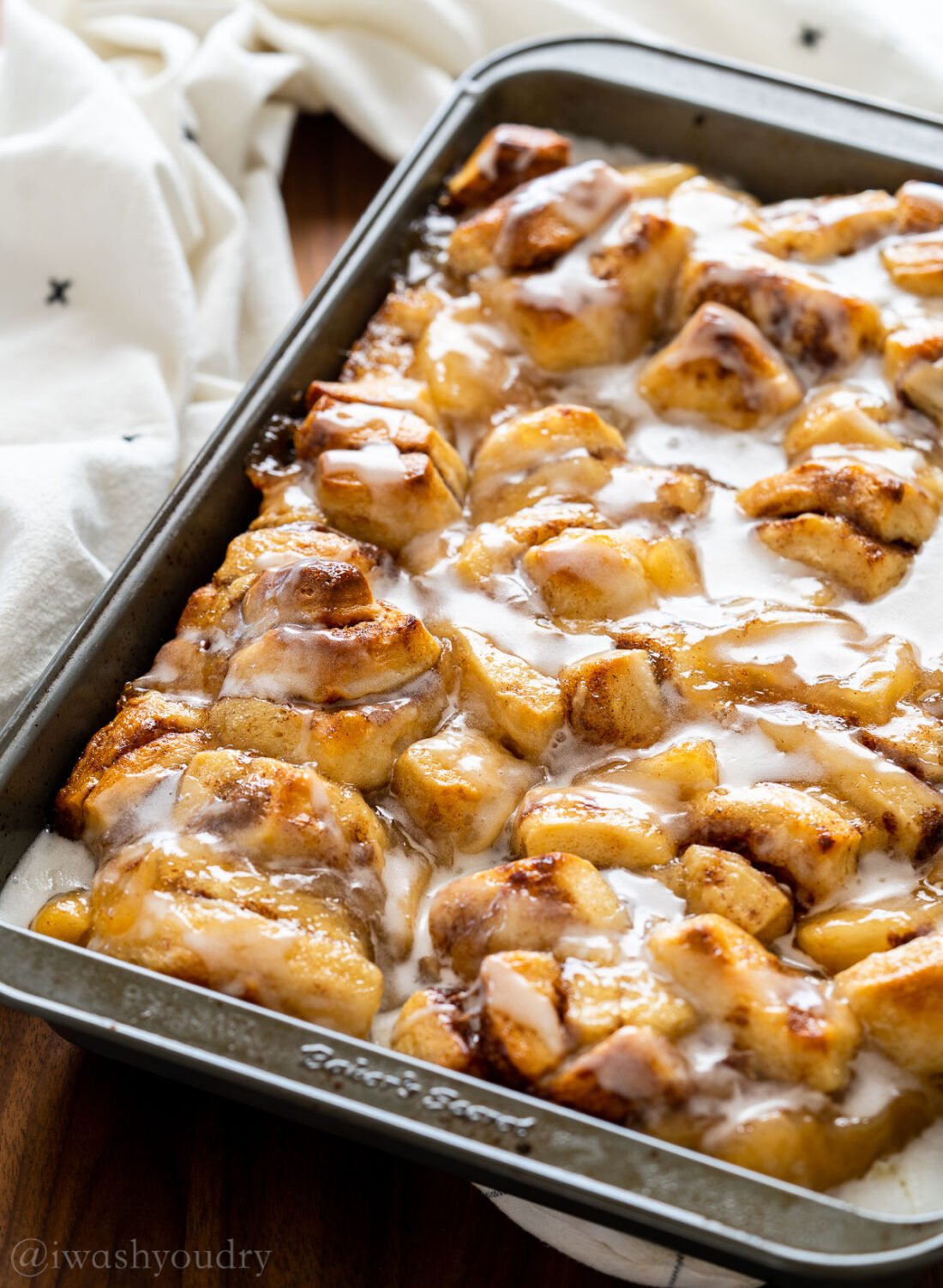 I had seen this easy recipe using a can of Pillsbury cinnamon rolls and apple pie filling all over Instagram and on a whim I grabbed the two ingredients before heading out camping with the family.

After combining the two ingredients together I baked them up in a dutch oven. We ate this deliciousness by a campfire and everyone was so happy!

Ever since that evening by the campfire, we’ve made this recipe at least a dozen more times because it’s always such a hit. 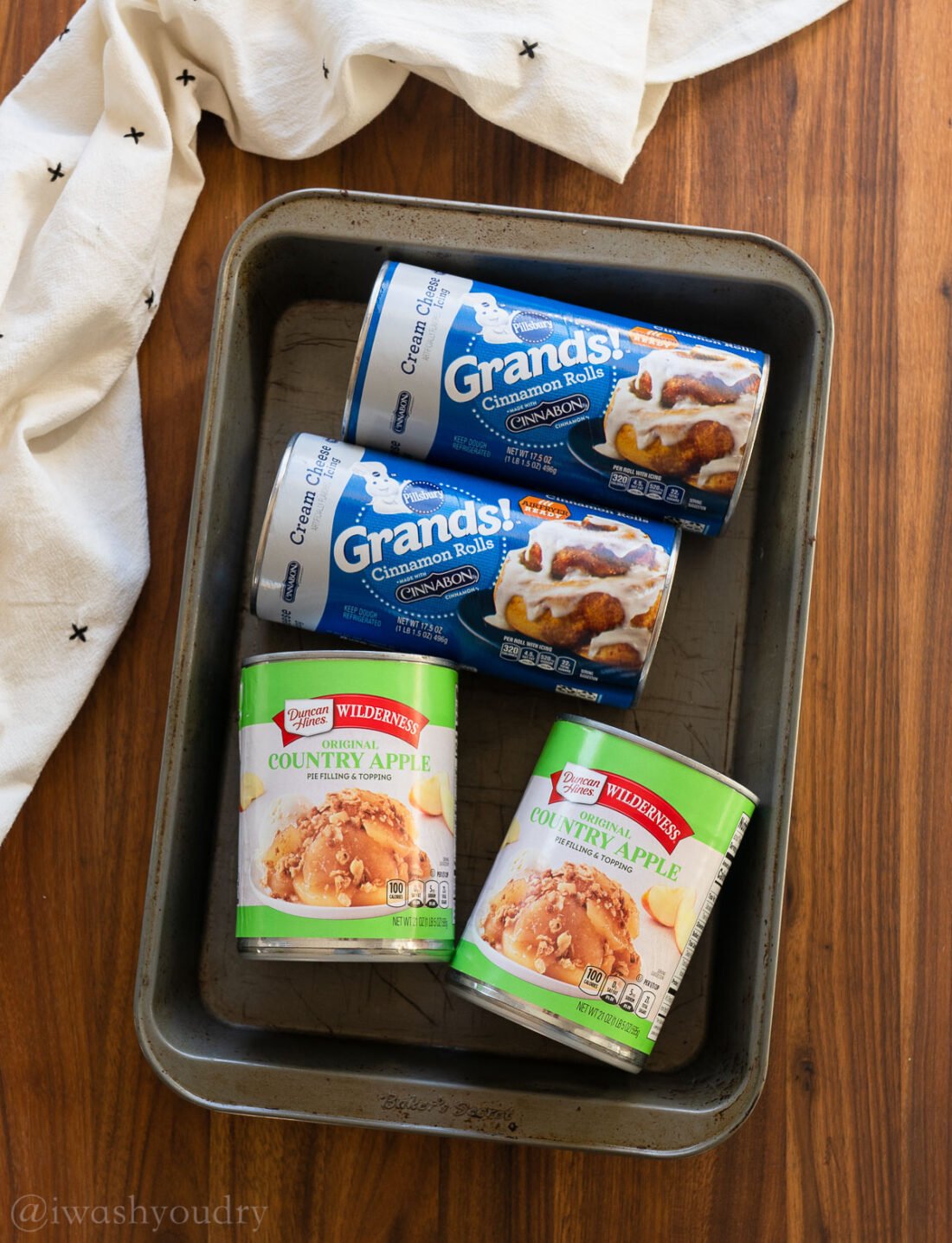 One of the main reasons I love this recipe is because it’s just these two ingredients and it takes only a few minutes to prepare.

Which means I have more time to be present with my family and don’t have to spend so much extra time in the kitchen.

How To Make Cinnamon Roll Bake 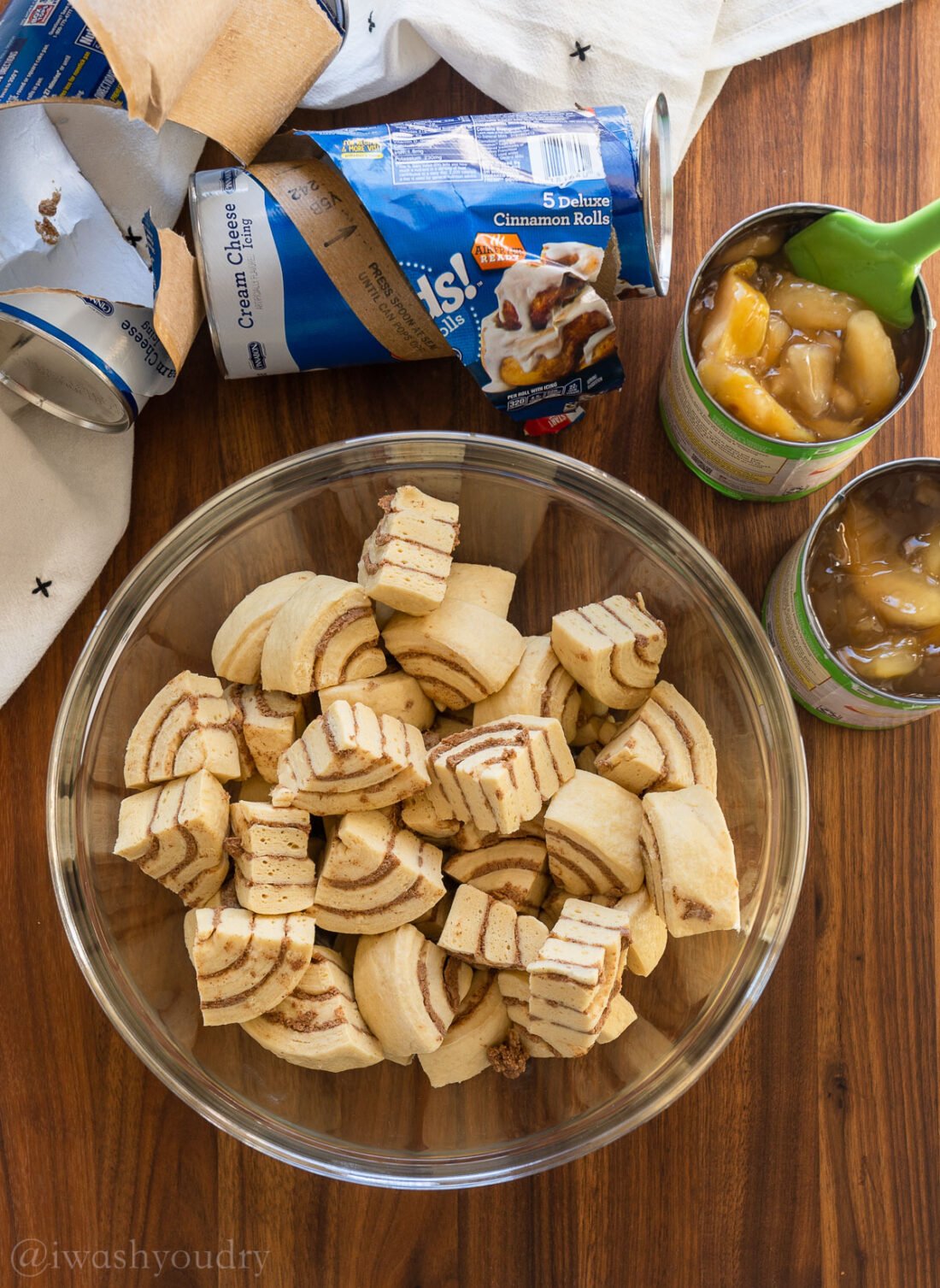 Scoop the apple pie filling out of the can and into the bowl with the cinnamon rolls, then stir gently to coat everything.

Pour the cinnamon roll mixture into a prepared baking dish and spread into an even layer. 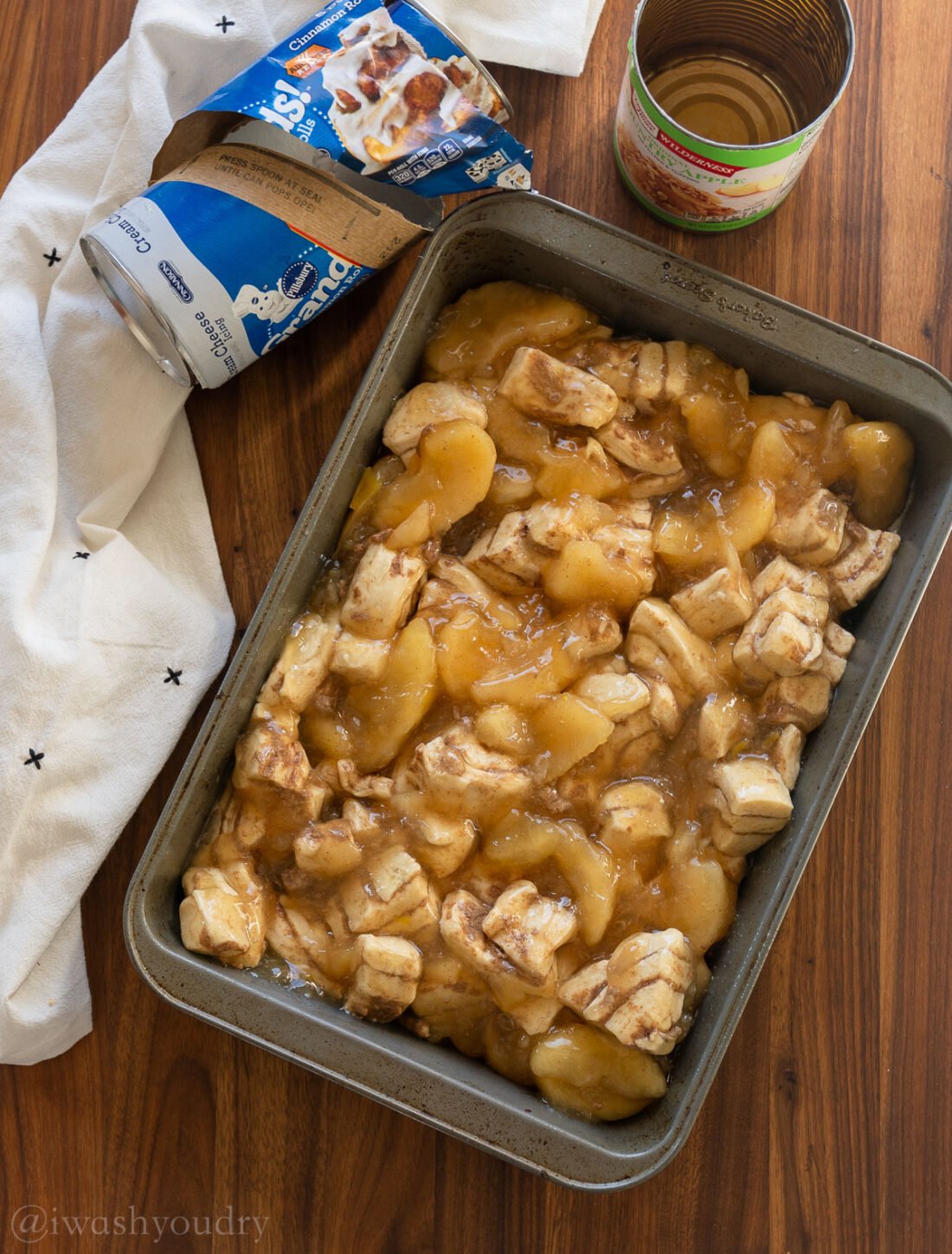 Place the cinnamon rolls into a preheated 350 degree F. oven for 45 to 50 minutes, until the center is baked through and the top is golden brown.

While the cinnamon roll bake is still warm from the oven, stir up the icing that was previously set aside and drizzle it over the top. Make sure to enjoy this dish while it’s still warm for that extra gooey deliciousness! 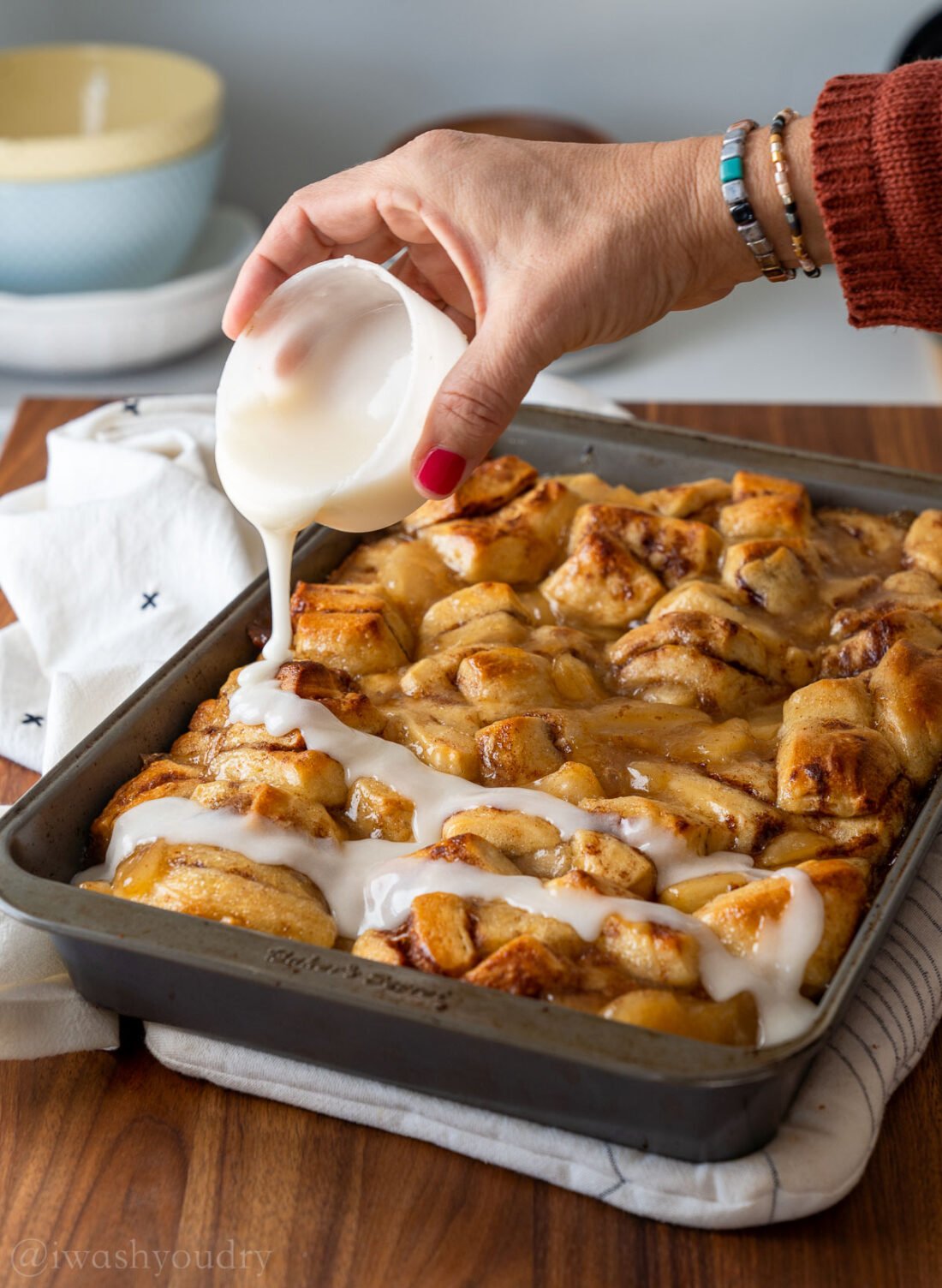 I’m telling you, the warm cinnamon spices and sweet apples just go together so perfectly.

If you’re looking for a delicious breakfast to serve company for the holidays, this is definitely it. Not only does it taste delicious, but your home will smell fabulous and inviting.

One Tube or Two?

For this recipe, I’m using two tubes of pillsbury cinnamon rolls because it’s plenty to feed my large family. This recipe should feed about 8 to 10 people.

If you want to halve the recipe, to feed a smaller crowd, you definitely can.

*Baking times will be shorter for a half batch (about 25 to 30 minutes). 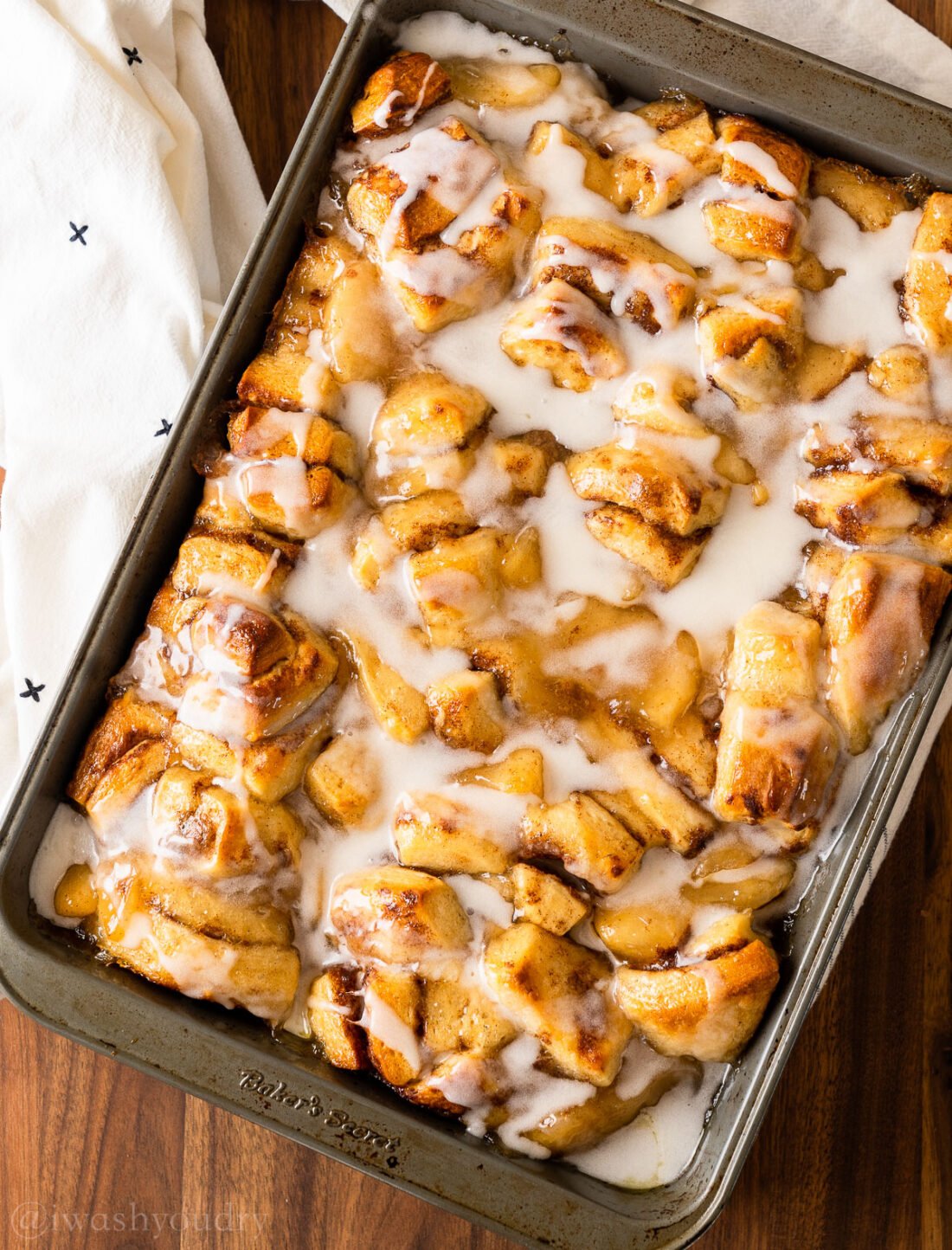 What To Serve with Cinnamon Roll Bake?

When I serve this warm and toasty cinnamon roll bake for breakfast or brunch I will serve it along with a few fresh fruit options as well as some savory options. 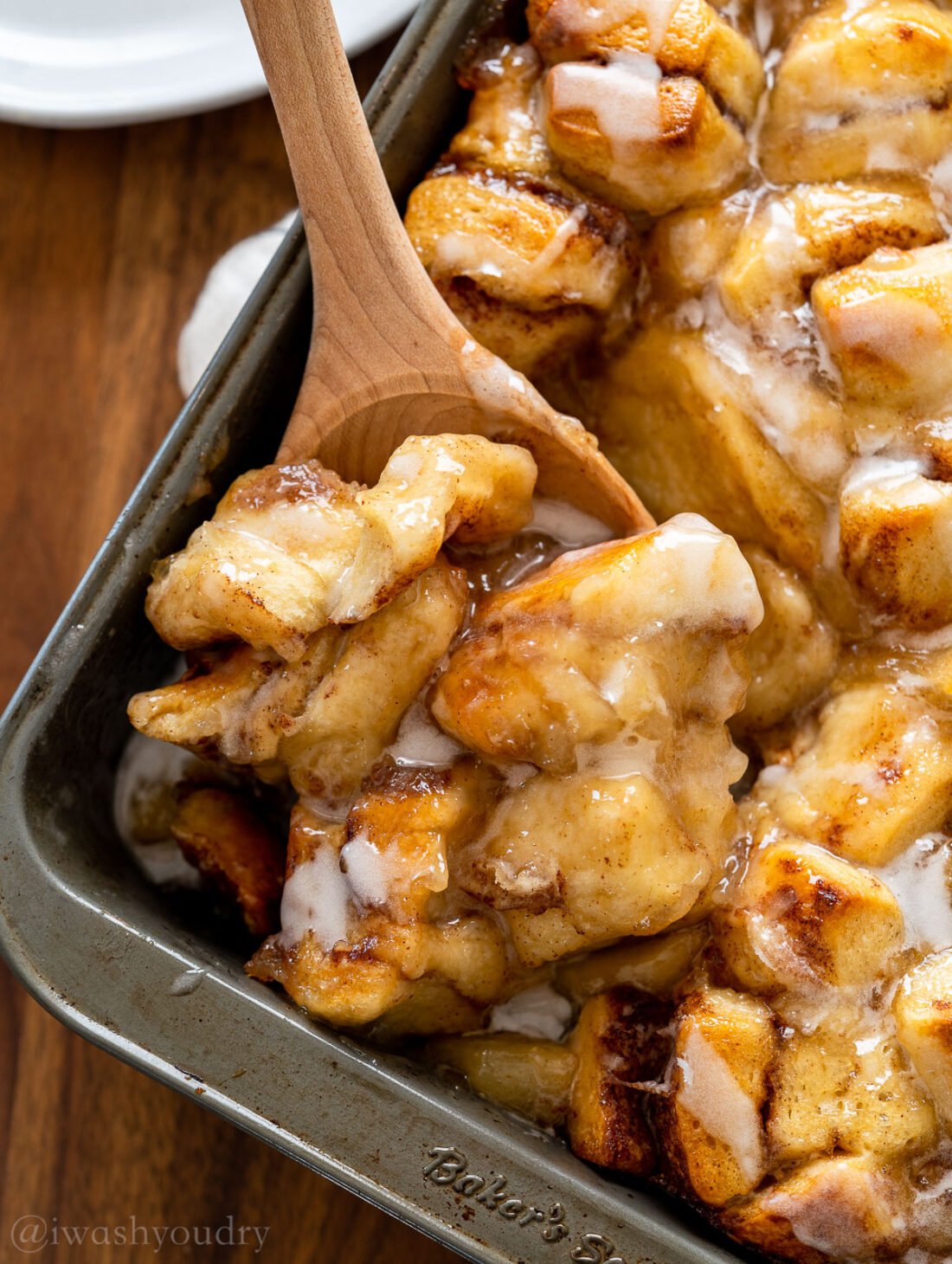 If you’re serving it as a warm dessert you could also serve it with a scoop of vanilla ice cream on top.

How To Make Ahead & Store

Wanna get a head start on this recipe? You can easily prepare the cinnamon rolls ahead of time by combining it all in the casserole dish. Cover and place in the fridge overnight.

In the morning, simply uncover and bake!

I wouldn’t prepare this further than 24 hours in advance prior to baking.

After the cinnamon roll bake has finished cooking, you can cool to room temperature, cover and refrigerate for up to 3 days.

Since I think this is best served warm, I would scoop out a serving and pop it in the microwave for about 15 to 30 seconds to heat up and enjoy!

I have a slew of delicious apple recipes that you are sure to enjoy. So after you give this recipe a try, go ahead and try these ones too… 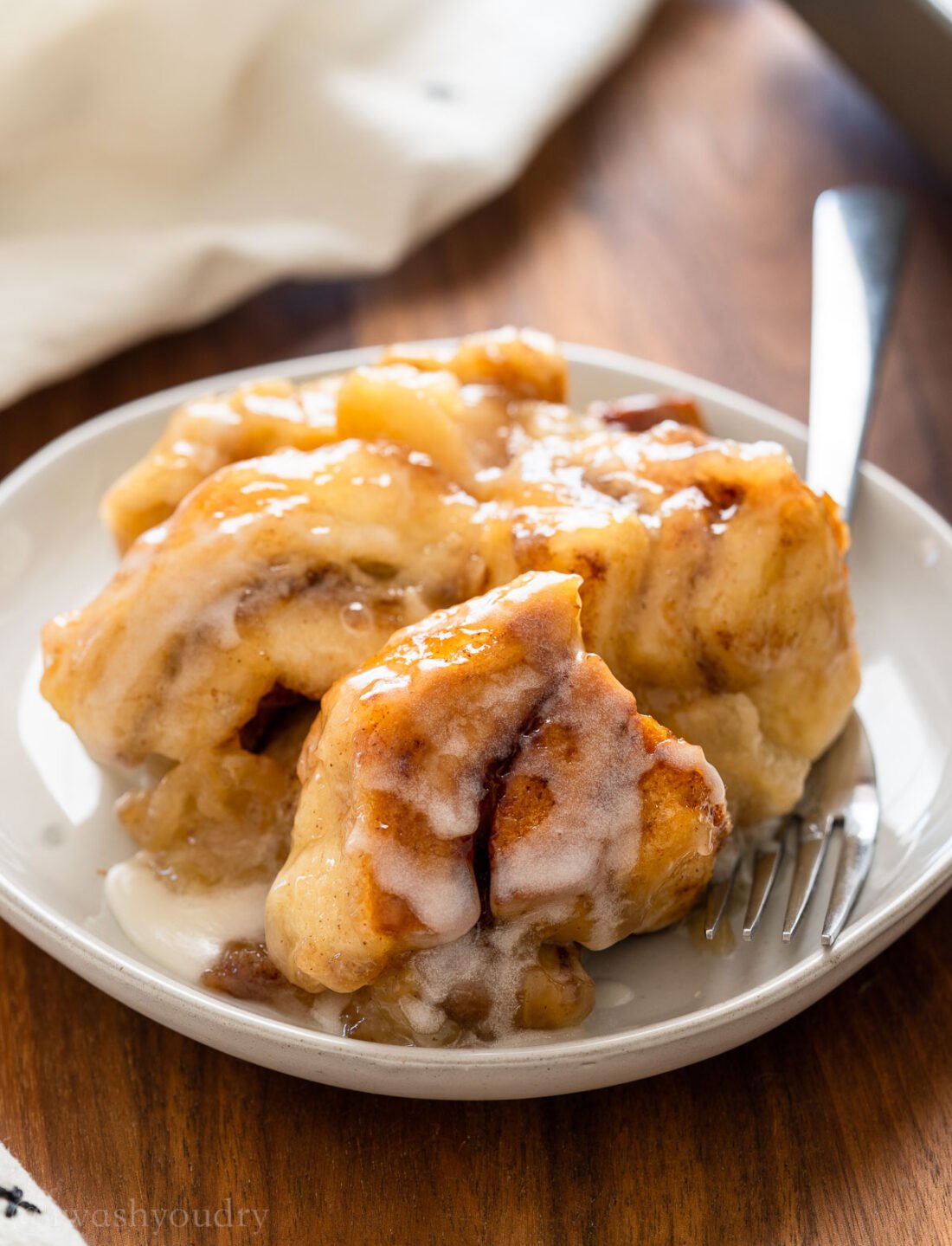 You’re going to be absolutely smitten with this warm and gooey Apple Cinnamon Roll Bake! I hope you enjoy it as much as we do! 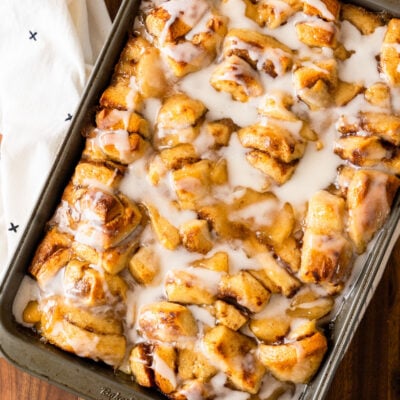 *You can half the recipe and bake in an 8x8" dish for just 25 to 30 minutes.  **If needing to prepare ahead of time: cover prior to baking and place in the fridge for up to 24 hours. 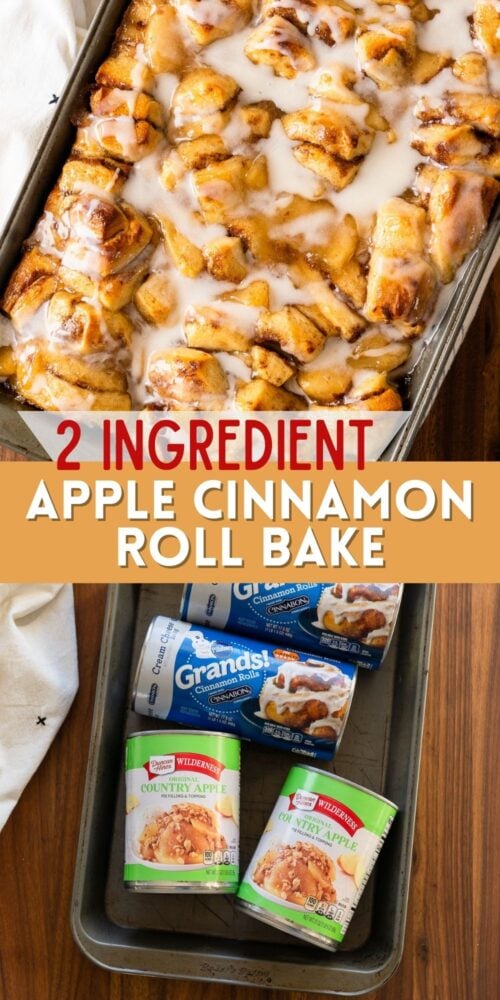