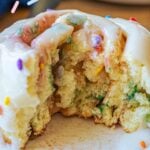 When you want to take my Classic Cinnamon Rolls recipe to the next level, this is the recipe to bake! 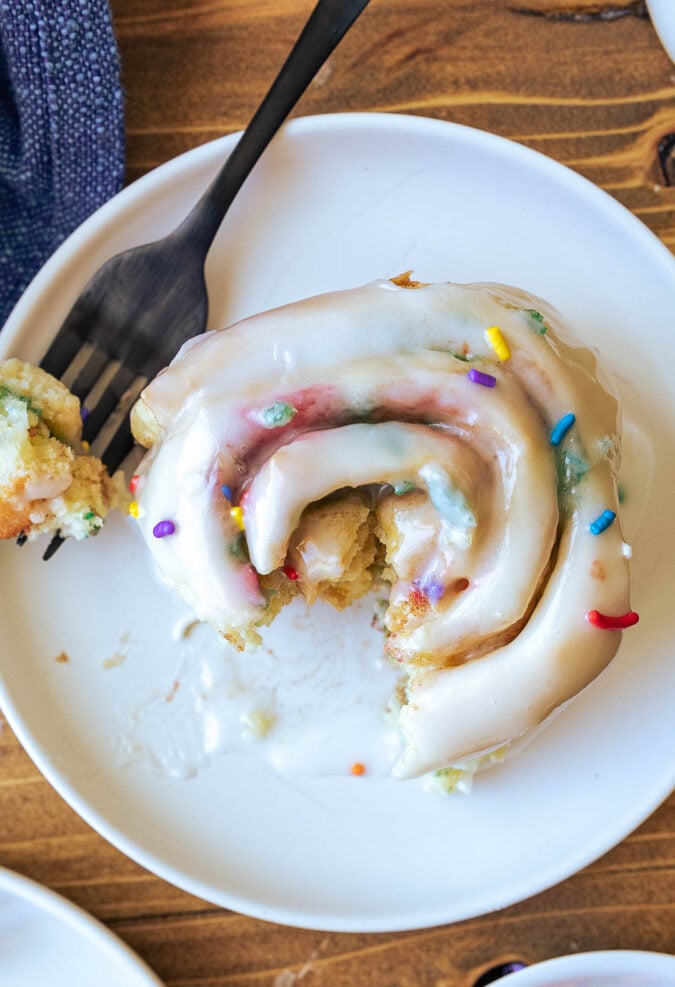 Whether you’re celebrating a birthday, holiday, special occasion or just want something fun to bake, these cinnamon rolls are the perfect treat.

Soft and tender cinnamon rolls with a delicious buttery vanilla taste throughout… plus plenty of sprinkles! So much fun! 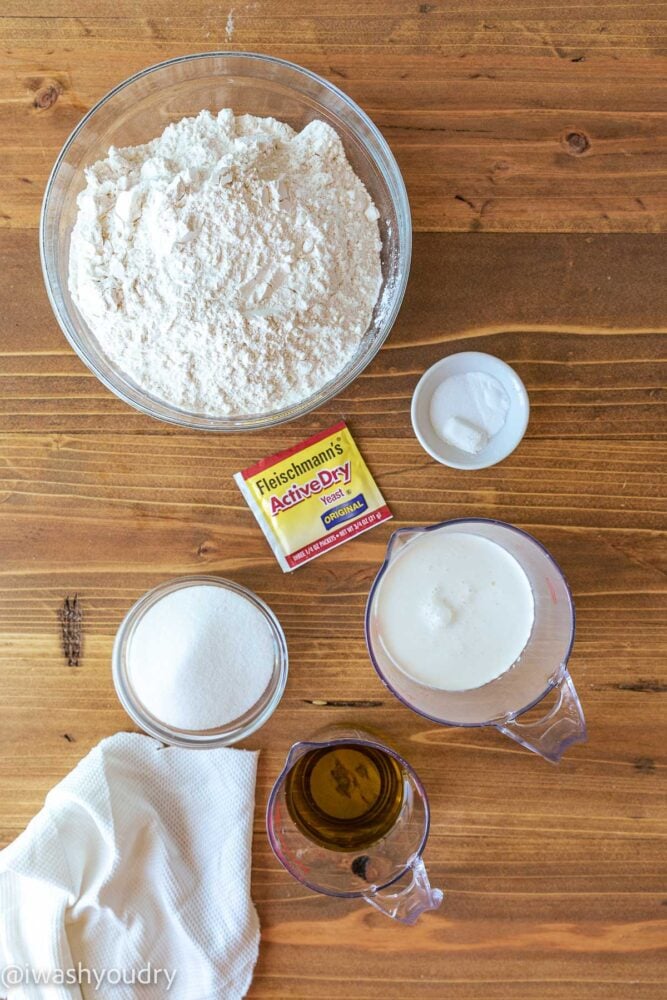 Are they breakfast or dessert? I’ll let you make that decision.

Here’s a quick run down on how to make the cinnamon rolls. Make sure to check out the printable recipe card below for the step-by-step instructions plus any added notes.

HEAT THE MILK   Add the milk, cream, sugar and olive oil to a large pot over medium-high heat and bring the mixture ALMOST to a boil. Stir to dissolve the sugar, then remove from heat and let it cool till it reaches 105 degrees F. 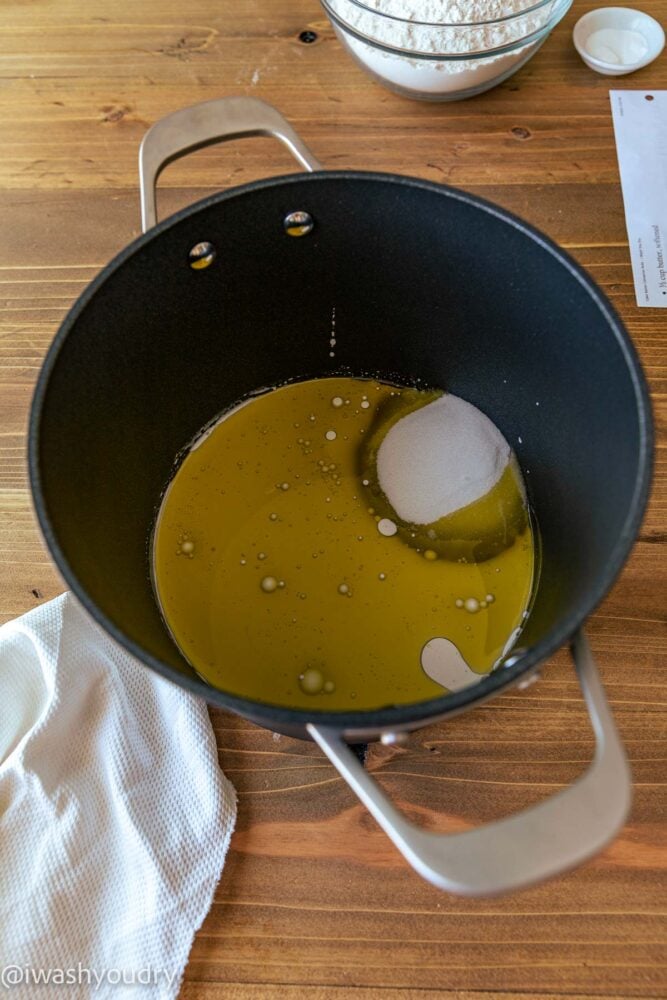 ADD YEAST AND FLOUR   Sprinkle the yeast over the warm milk and sugar mixture and let it sit for about 10 to 15 minutes to activate the yeast. Once the yeast is foamy, you can add in the flour and mix it with a wooden spoon until a dough forms. 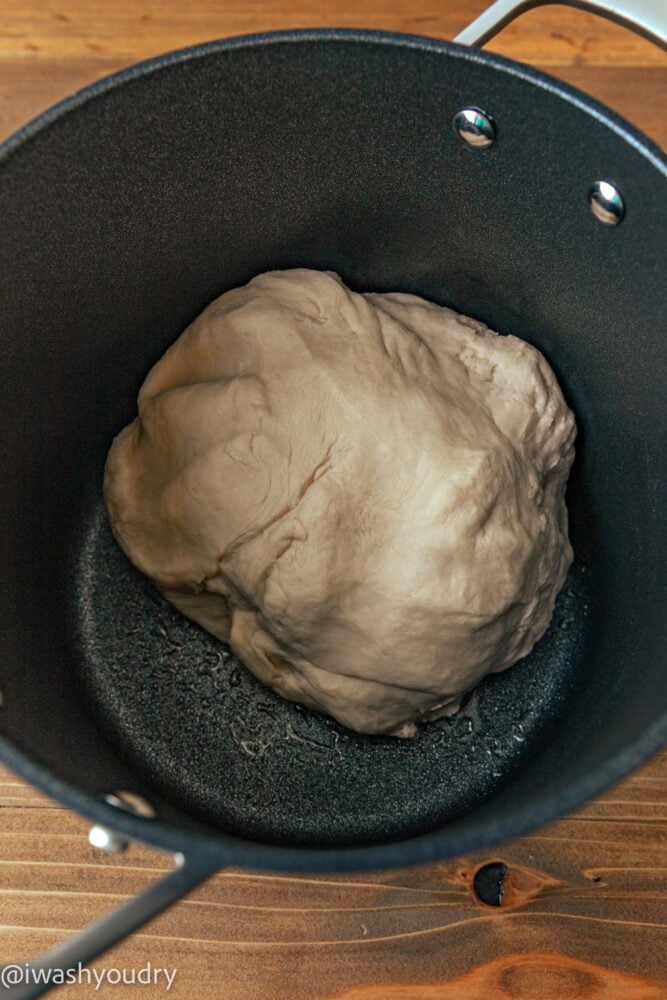 FIRST RISE   After your dough ball is formed, cover it with a clean towel or plastic wrap and let it rise for about 1 hour, or until it’s close to double in size.

ADD MORE FLOUR   Next you’ll deflate the cinnamon roll dough and knead in a little more flour, salt baking powder and baking soda, until the dough is soft and tender. 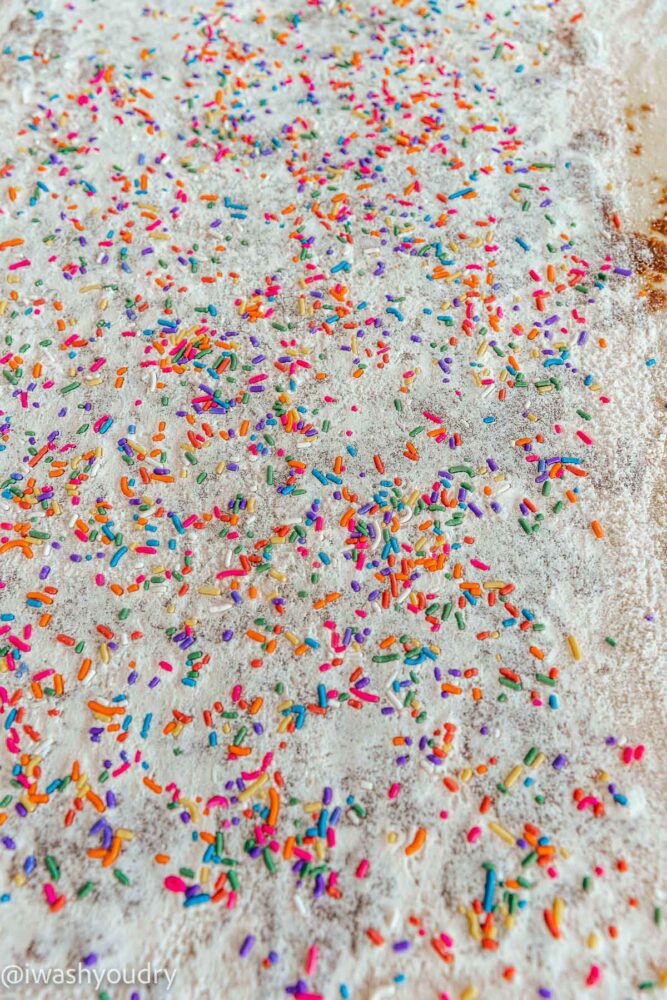 ROLL OUT DOUGH   Turn the dough out onto a floured surface and roll into a large rectangle shape. Combine the softened butter, brown sugar and cinnamon in a small dish and spread over the dough.

SPRINKLE CAKE MIX   Layer the cake mix and sprinkles over the top of the brown sugar and cinnamon mixture and then roll up tightly. Cut into discs and place in a greased baking dish. 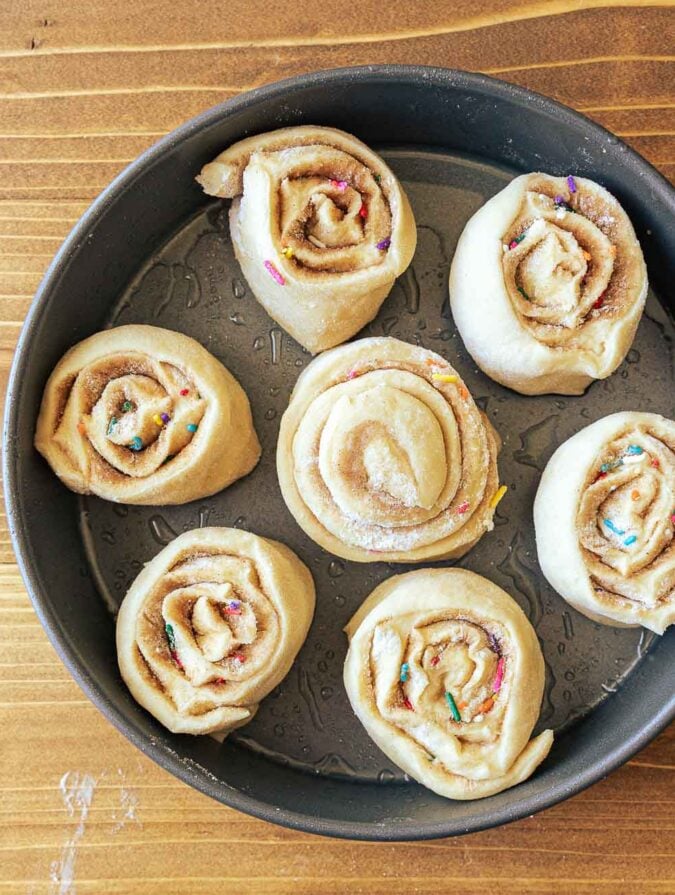 SECOND RISE   Cover the cinnamon rolls lightly with a clean cloth or plastic wrap and let rise again for an additional 30 minutes. They should puff up in size before baking.

BAKE   Pop the cinnamon rolls into the oven and bake until lightly golden brown around the edges. 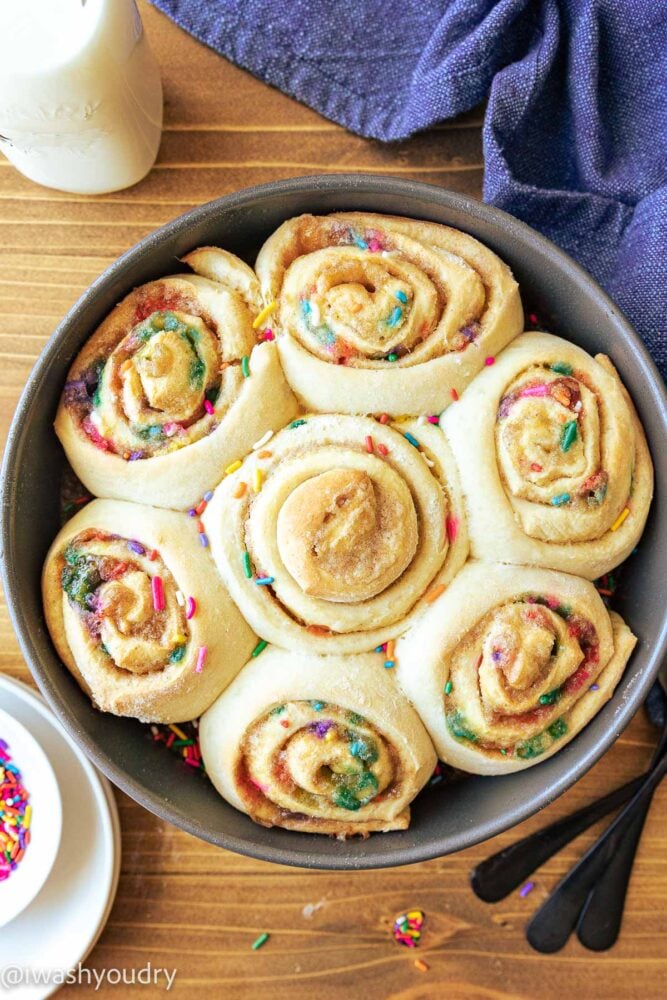 DRIZZLE WITH ICING  Whisk up a quick powdered sugar glaze and drizzle it over the warm cinnamon rolls and top with extra sprinkles. These are such a fun and tasty treat! 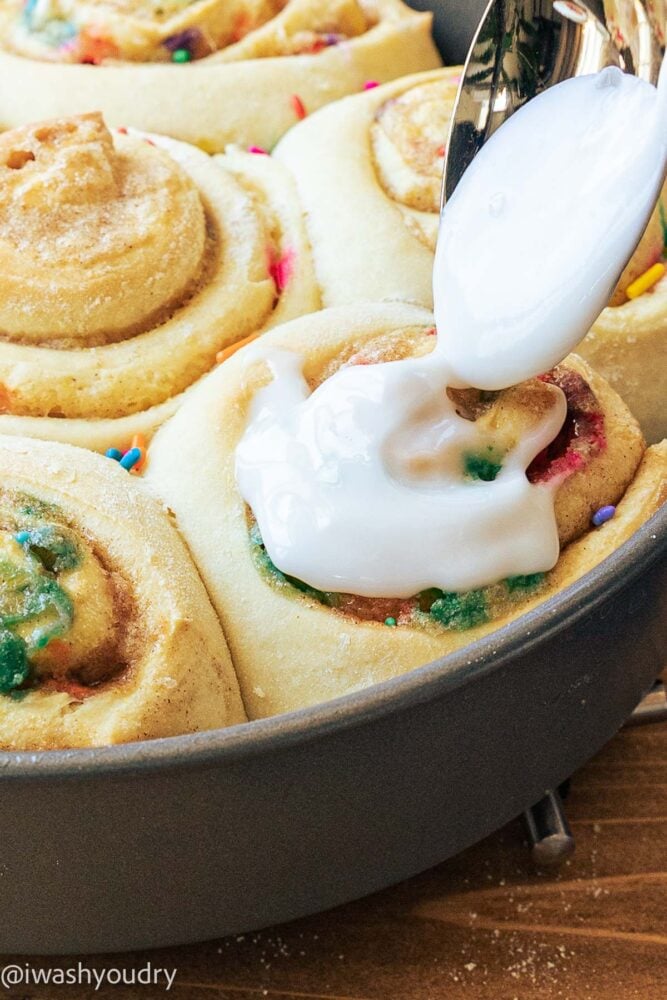 Here are a few recipe tips and suggestions for you to help you bake the most delicious cinnamon rolls ever! 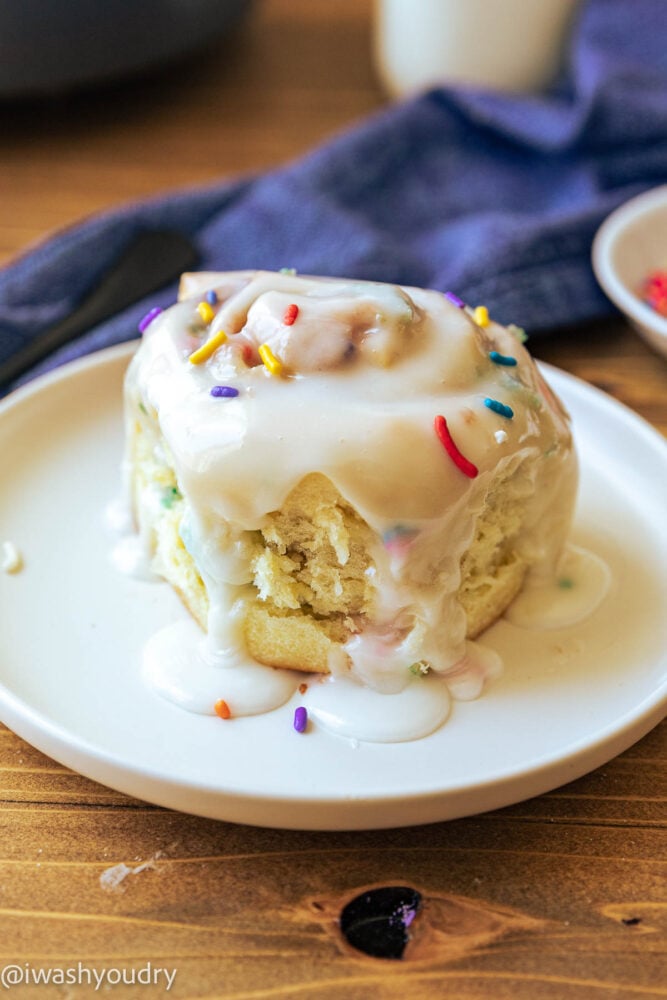 How Do You Keep Cinnamon Rolls Soft and Moist?

The key to keeping your cinnamon rolls soft and moist is how you store them. You will want to pack them air-tight.

Once the cinnamon rolls have cooled, you can individually wrap them in plastic wrap and store them in a zip-close bag.

If you want to keep them in the pan, you can wrap the pan tightly as well.

Can You Freeze Cinnamon Rolls?

Yes! I recommend you bake the cinnamon rolls first, let them cool completely, then wrap tightly and freeze for up to 3 months.

To reheat, simply place in the fridge for 24 hours, then you can unwrap and pop in the microwave for about 1 minute. Soft and gooey cinnamon rolls coming right up! 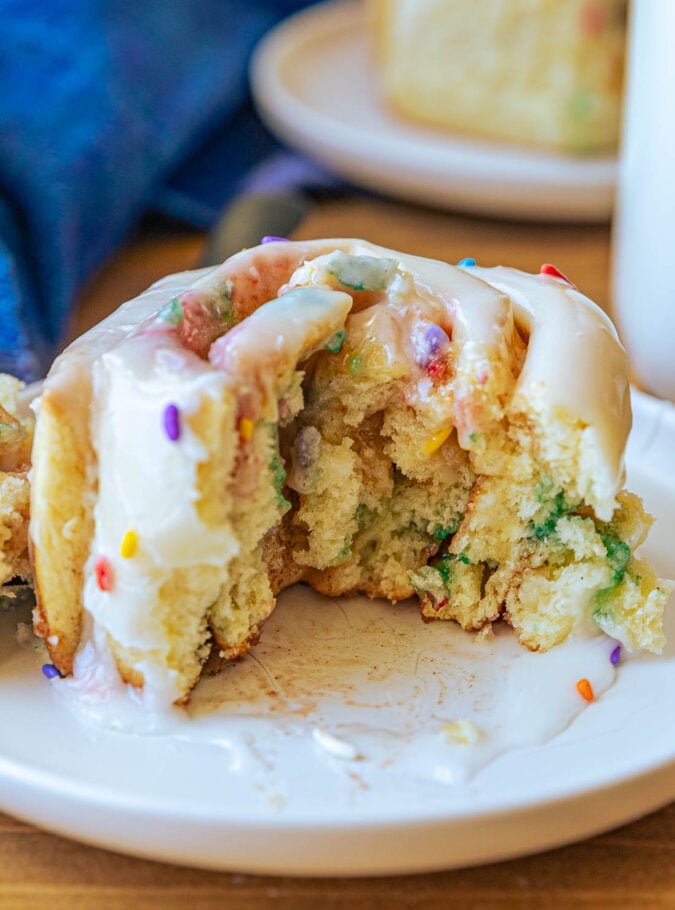 Sprinkles make everything better! Here are a few more fun cake batter flavored recipes that are sure to jazz up any birthday!

I can’t wait for you to give these tasty Birthday Cake Batter Cinnamon Rolls a try! I know you’re going to love them! 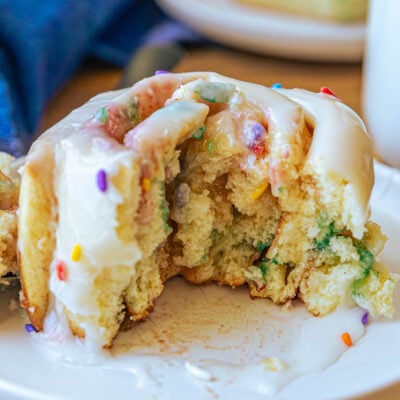 For the Cinnamon Rolls:

Top Favorite Recipes from I Wash You Dry now available in a hard-cover, spiral-bound book that’s gorgeous and perfect for everyday use.