We love to pair this classic Philly Cheesesteak with potato chips, crunchy Dill Pickles or my Macaroni Salad 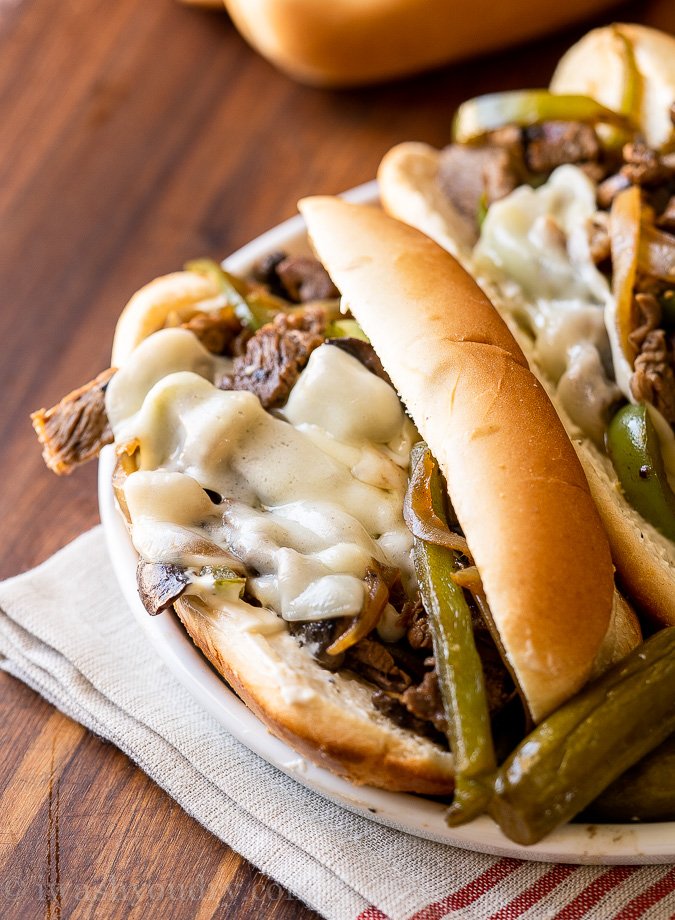 If you’re looking for a delicious warm sandwich to fill you up, this is definitely it.

I’ve taken the classic street food sandwich and made it into an easy homemade meal that you’ll absolutely love.

So what is a Philly Cheesesteak Sandwich? And why are so many people so passionate about the origins and what goes in it?

The cheesesteak sandwich is made up of thinly sliced steak that served hot with melted cheese in a long, crusty Italian roll. Peppers, onions and mushrooms are optional, but highly recommended (by me).

It’s a popular street-cart food, with its origins coming from Philadelphia, Pennsylvania. With this recipe, you’ll be able to make that crave-able sandwich in your own home! 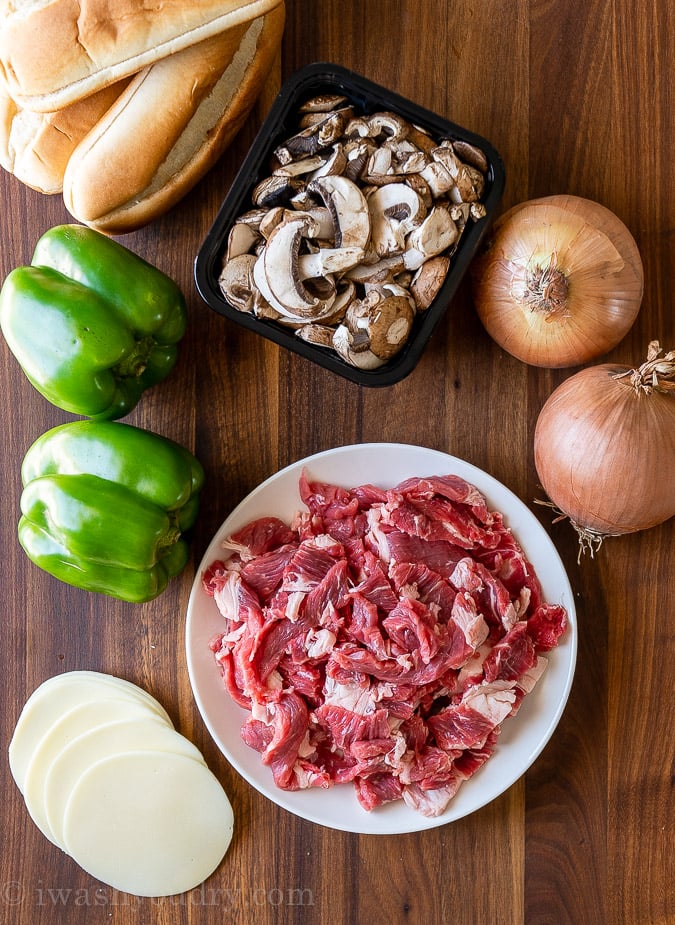 How To Make Philly Cheesesteak Sandwiches

Now that you have all of your ingredients gathered, let’s make these quick-cooking steak sandwiches! 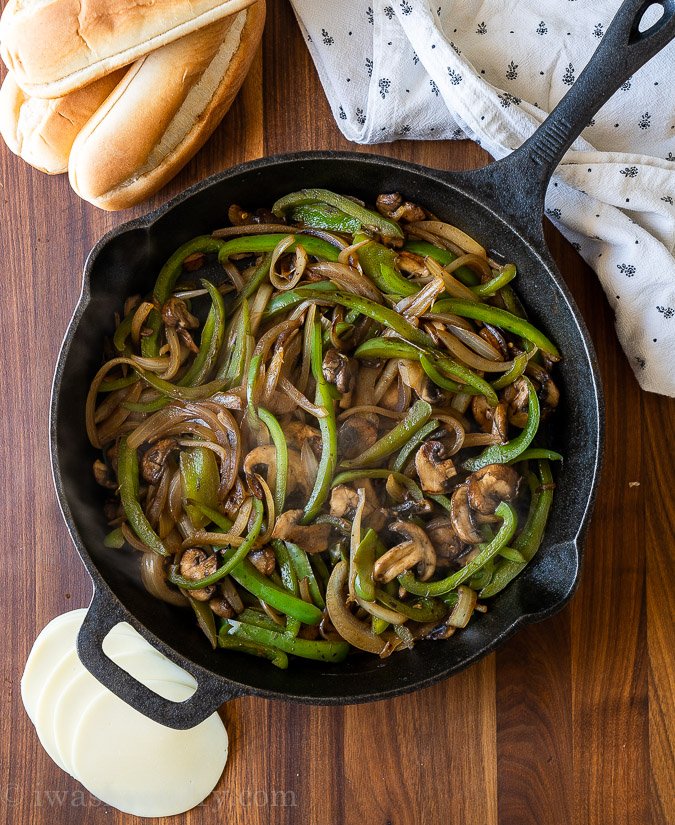 It may go against all things Philly Cheesesteak, but I LOVE adding this special (and quick) homemade sauce to my steak sandwiches. It really adds a punch of flavor and a creamy touch that is simply irresistible.

That’s it! Just combine the ingredients together and then slather the sauce over the toasted bun and then pile on the saucy steak and peppers. Oh mama! It’s a delicious bite. 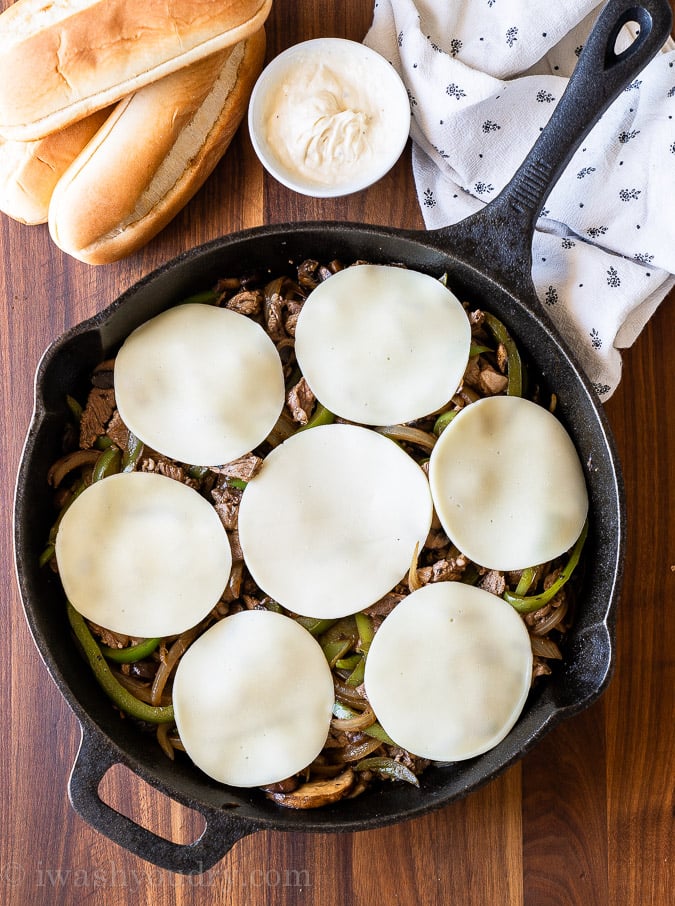 Let’s get into the nitty-gritty of some of the common questions people have when it comes to the Cheesesteak Sandwich.

What Type Of Beef For Cheesesteak?

Ribeye! It may be an expensive choice, but it’ll give you the BEST flavor and texture. With fat marbled throughout, it’ll stay nice and juicy any way you cut it.

If you can’t do ribeye, look for a cut of beef that is well-marbled and be sure to slice thinly against the grain. Some choices are: Flank Steak, Beef Chuck, Sirloin, etc.

How To Thinly Slice Steak

The trick to a good cheesesteak sandwich is in that THINLY sliced steak. It will almost melt in your mouth.

You could also invest in a meat shaver… but that might be a little extreme.

What Type Of Cheese For Cheesesteak?

There is much debate on which type of cheese to use for a good Philly Cheesesteak Sandwich. While some are insistent on a classic American cheese sauce, I prefer something more mild, like Provolone.

Try to avoid using a smoked provolone, which can be over-powering. You can also use gruyere cheese.

Really, the choice is up to you. Make it how you like it! It’s a sandwich for crying out loud!

Peppers and Onions In Cheesesteak?

It’s true, a classic cheesesteak sandwich does not usually come with peppers, onions or mushrooms. HOWEVER, I use every opportunity I can to sneak in veggies for my family, and since the combination of caramelized onions, peppers and mushrooms pair so nicely with the thinly sliced steak, we go for it.

It bulks up the filling, meaning I can serve more people, and everyone is happy. That being said, if you’re not a fan of any of these ingredients, feel free to leave them out! 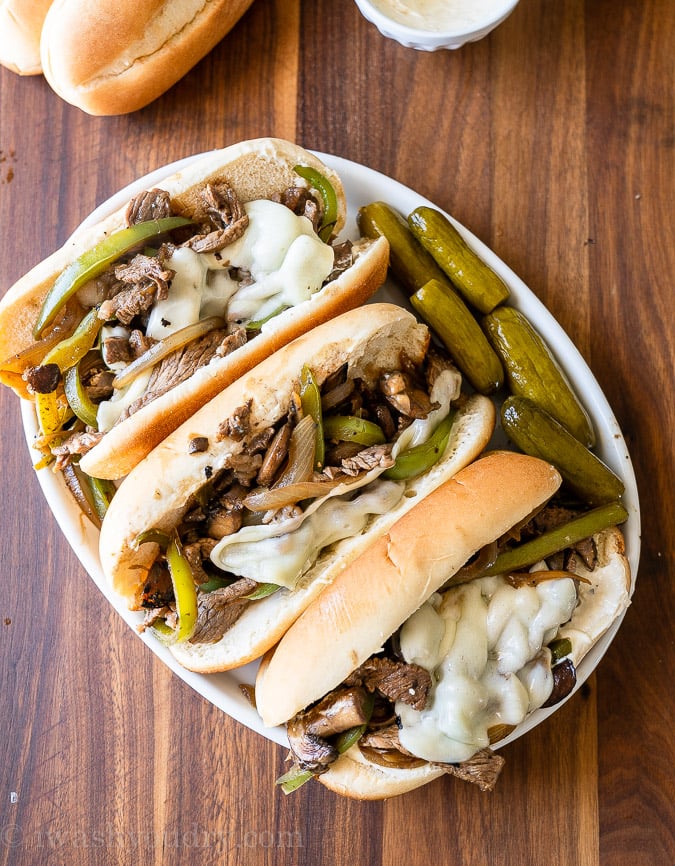 You know I’m a huge fan of the flavors that come in a Philly Cheesesteak Sandwich, because I’ve added it to so many other vessels. Check out these fantastic recipes… 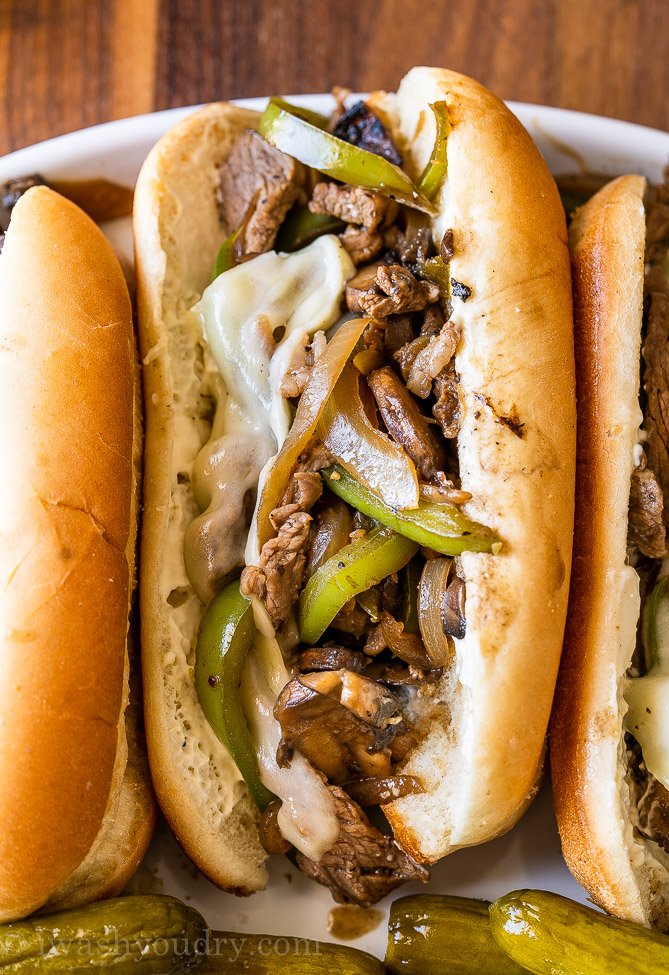 I can’t wait for you to give these saucy sandwiches a try! I know you’re going to love them! 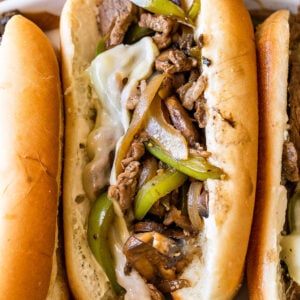 PIN THIS IMAGE TO SAVE THE RECIPE