There is nothing more comforting than a big pile of sweet and sticky bread that’s been stuffed with a raspberry cheesecake filling and dunked in butter then rolled around in cinnamon and sugar. This Raspberry Cheesecake Monkey Bread will disappear just as quickly as it’s made. 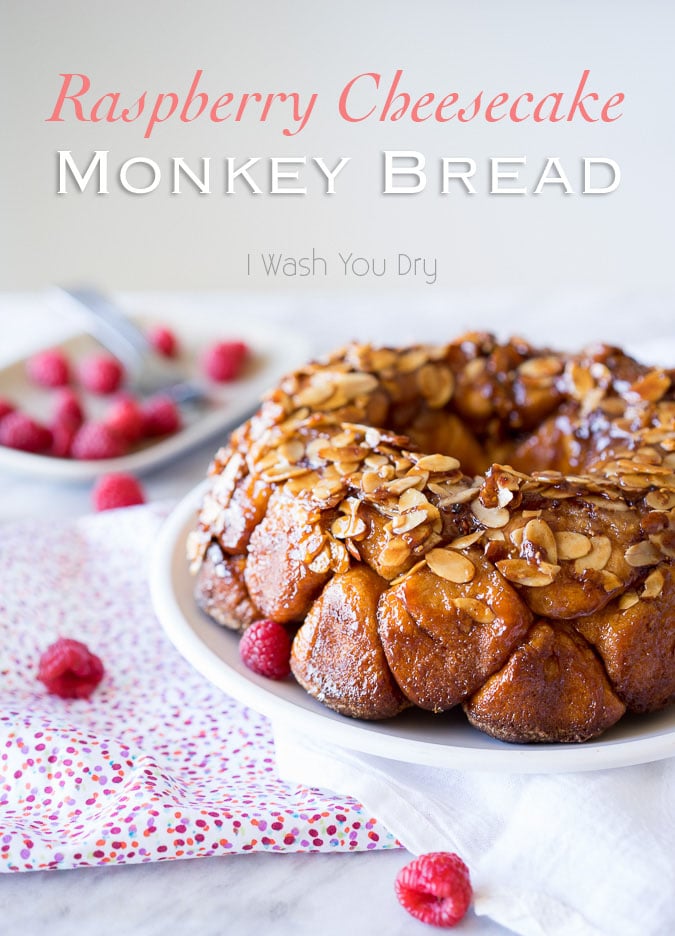 The night before we packed up and left Canada, my good friend invited us over for one last dinner.

The highlight of the night was standing next to her in the kitchen, chatting and laughing about the last two years, while we worked together to make a cream cheese stuffed monkey bread for dessert.

She almost decided not to make it, but I’m so glad we did, because it was ridiculously delicious and gone in seconds!

It’s actually quite simple to make. All you need to do is line a fluted bundt pan with sliced almonds (walnuts or pecans would work too), then pour in a mixture of maple syrup, butter and raspberry preserves.

Side note- that syrup would be fantastic on pancakes… just sayin. 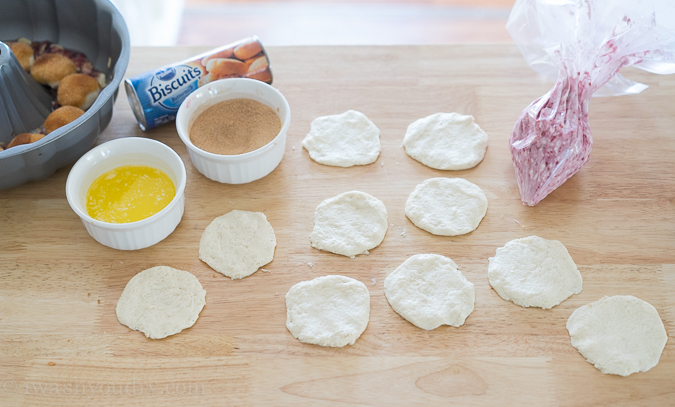 I found that making an assembly line of sorts made it easier and quicker to fill the biscuits. Just combine some cream cheese and more raspberry preserves in a bowl and then place it in a zip close bag. Snip the end off and then you can easily squeeze a small ball into the cinnamon and sugar mixture and roll it around.

Enclose the cream cheese filling in each biscuit by pinching the dough together. Then dunk the tops in butter and coat in cinnamon and sugar. 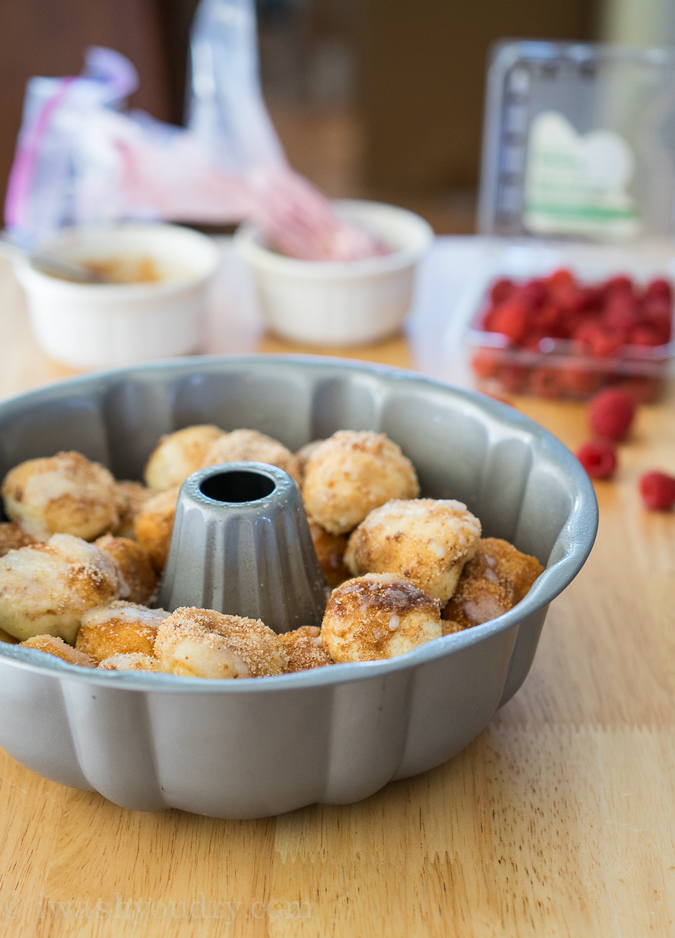 When you’ve done all the dough balls, pour any remaining butter and cinnamon and sugar over the top. Cause… why not!

Bake it for about 30 to 35 minutes and you’re ready to devour! 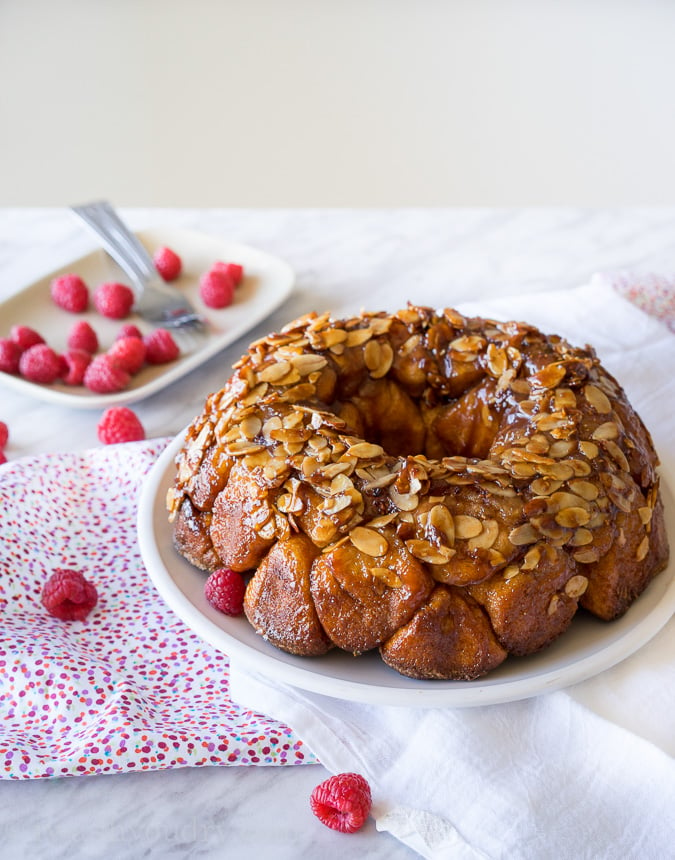 These are best served warm, so don’t delay in scarfing them down… I mean… daintily eat one, maybe two… 😉

I won’t tell you how many I ate. Let’s just say I needed a little sugar therapy after finding out that the carpet that I ordered to be placed in my bedroom, office and son’s room was put on back order. For three more weeks.

After I had my fair share of this monkey bread I took a deep breath and picked out some new carpet that will be put in next week. So it all worked out. 🙂 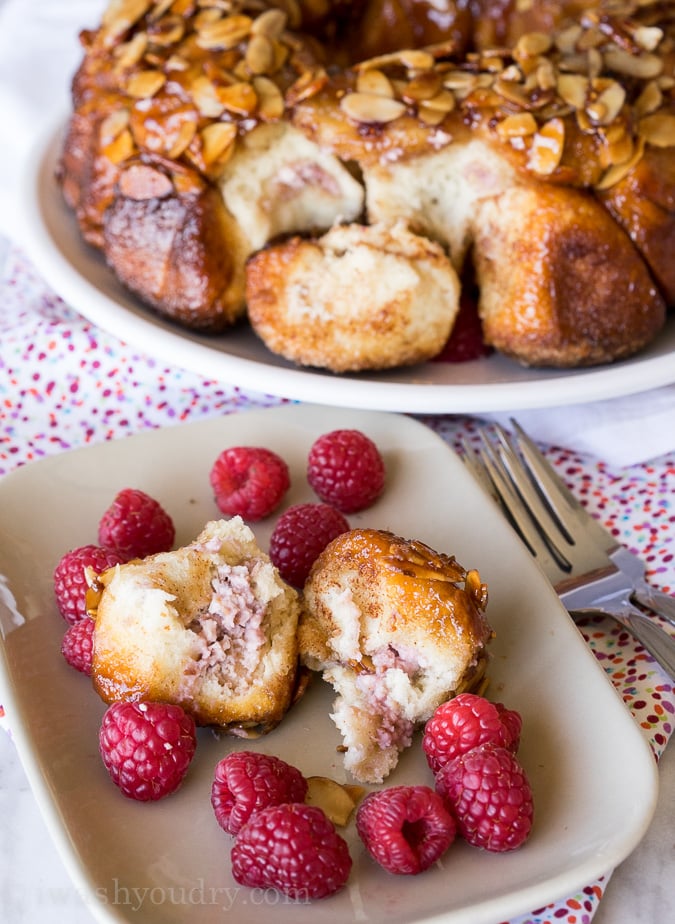 Apparently I need to make this more often to help with important decision making. 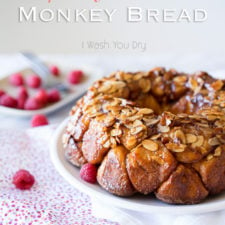 Disclaimer: This post is in partnership with Arizona Milk Producers and  Challenge Dairy. All thoughts and opinions are my own. Thank you for supporting the brands that make I Wash You Dry possible!