You guys! I’m back with another fantastic ONE pot wonder – dinner for you! But even better than that, this Creamy Red Lentil Penne Skillet is Gluten Free and it’s also packed full of protein, iron and fiber thanks to this awesome one-ingredient Red Lentil Penne from Uddo’s Kitchen! 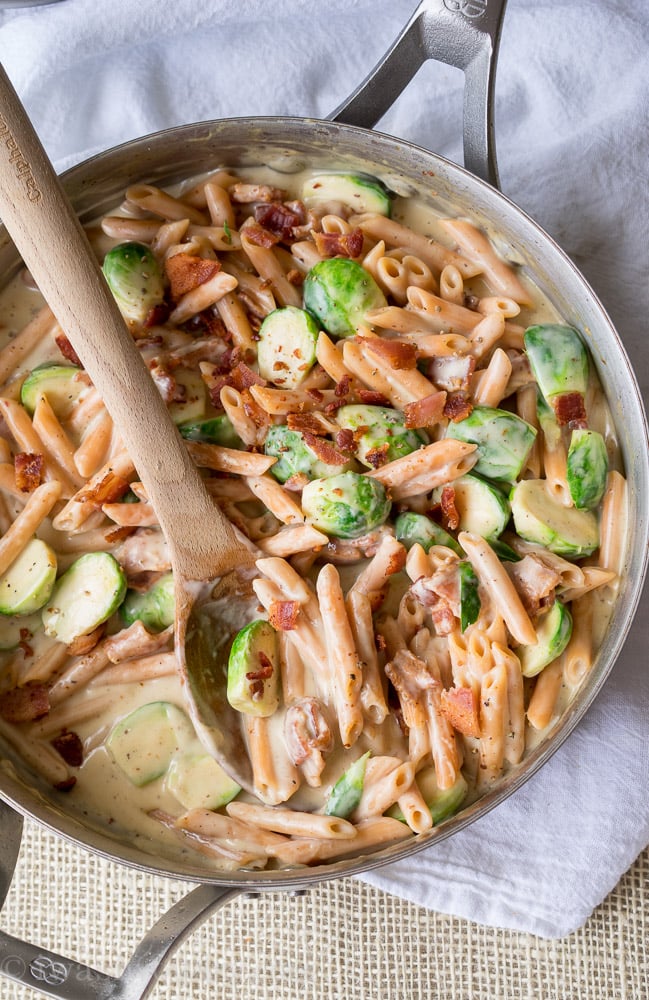 So you’re probably wondering… What on earth is a Red Lentil Penne, and how on earth is it just ONE INGREDIENT?!?!

I was curious too. The one ingredient is Red Lentil Flour, which makes this hearty pasta dish gluten free! 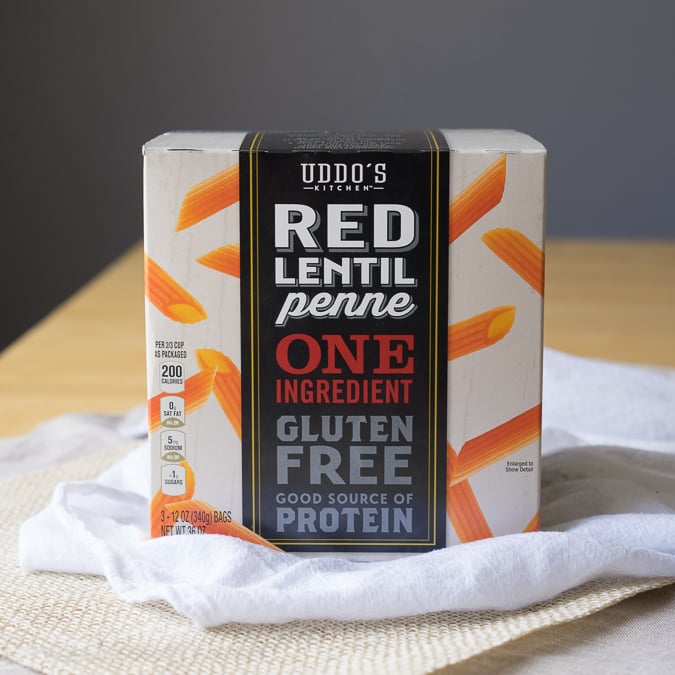 Now, I’m lucky enough to not have a gluten intolerance, but I do have some close family and friends who are Celiac, so I truly appreciate this pasta as a great alternative for them.

But what I also love is that it’s packed with 14 grams of protein, non-gmo and less than half the amount of carbs and calories compared to a traditional pasta! 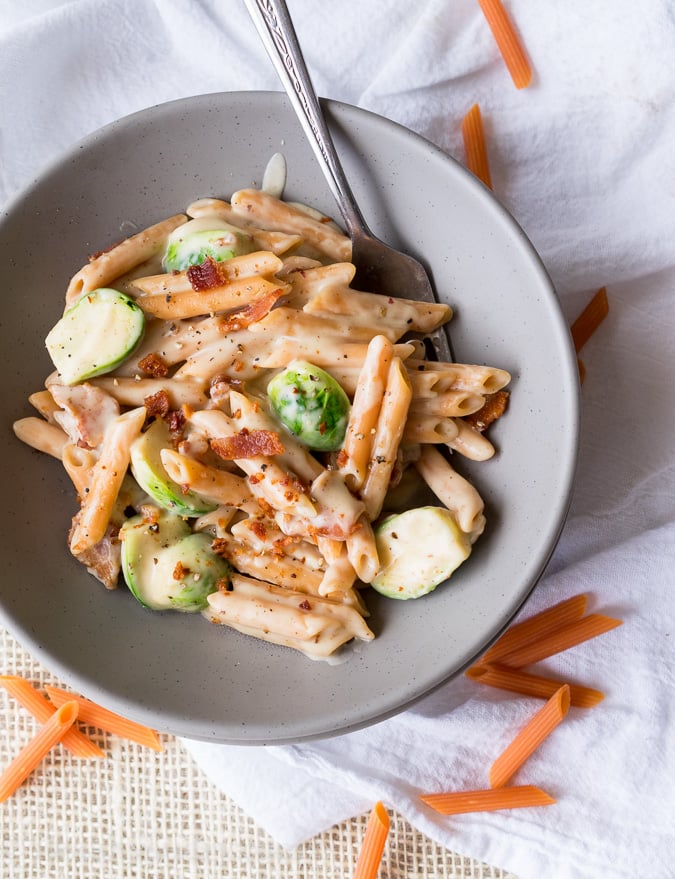 Now you’re thinking – How does it taste? Does it taste like normal pasta?

Yes, yes it does!

In fact, I could not even tell a difference in taste or texture compared to a traditional penne. I cooked it to a perfect al dente for this creamy and delicious skillet meal, and it was quickly gobbled up by me and my kids. 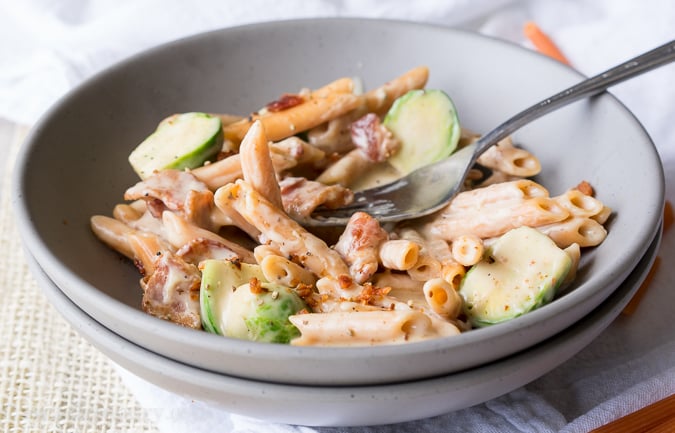 I loved how quickly this meal came together too.

First of all – bacon.

I cut up 5 strips of bacon and cooked them until they were nicely browned and crispy. I removed about 1 strip worth of bacon with a slotted spoon and set that aside for later.

Once the bacon was crisp I tossed in some garlic, the Red Lentil Penne a little chicken broth and water and let that simmer. A few minutes before the penne was finished cooking I added about 2 cups of trimmed brussel sprouts and stirred that in. If you’re not a fan of brussel sprouts you could add in frozen peas, fresh green beans, or even some sliced zucchini. 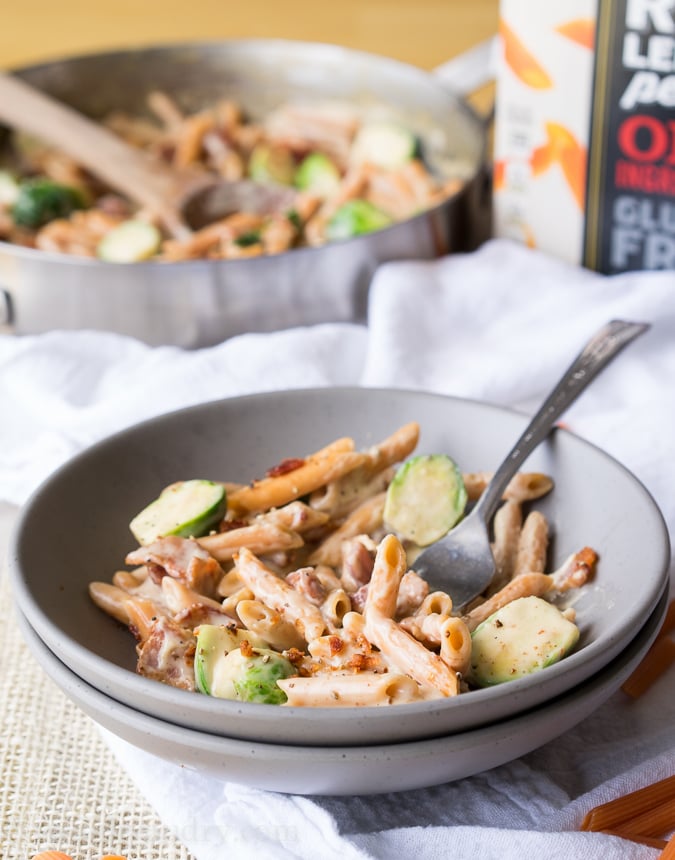 Once the brussel sprouts have become tender and the pasta is cooked fully, stir in a nice helping of heavy cream and parmesan cheese. Stir it until heated through and you’re all set for a delicious and filling dinner.    —With only one pot to clean!!!! 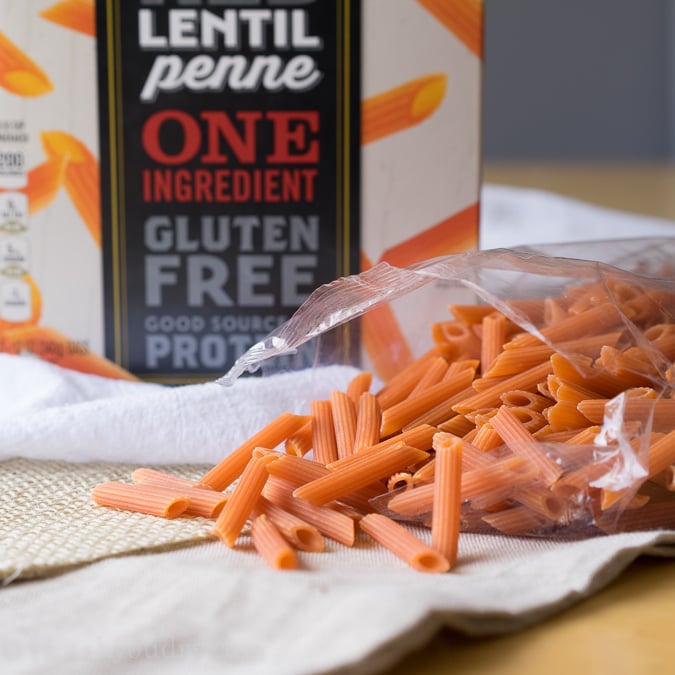 Now you’re wondering –  Where can I get my hands on some of this awesome Red Lentil Penne??

This stuff is currently being sold nationally at select Sam’s Club and at Costco Northeast and on Amazon!

But lucky for you, I’m giving away 6 boxes of this amazing pasta today!

That’s 12 {12oz} bags of Gluten Free pasta!! You’re definitely going to want to try this one!

Don’t forget this awesome recipe too! 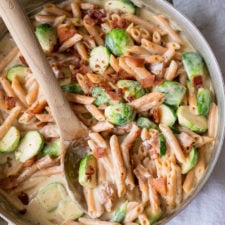 disclaimer: General Mills provided me with Uddo’s Kitchen Red Lentil Penne to sample and is compensating me to create a delicious dinner recipe. General Mills is providing the product for the giveaway. Only open to US residents. All thoughts and opinions are 100% my own. Thank you for supporting the brands that help make I Wash You Dry possible!